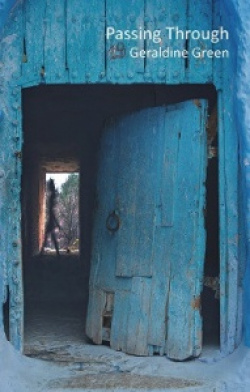 By sheer coincidence, when Geraldine Green’s book arrived for review I was reading another volume of poems bearing exactly the same title by the Welsh poet John Tripp.  Tripp’s book, which was published by Poetry Wales Press in 1984, explores change in a largely urban setting whereas Green’s book is a celebration of her native Cumbria couched in a rural setting. Both poets share the same gift of sharp observation followed by close reflection triggered by their own experience of passing through familiar landscapes.

A quotation from Wendell Berry and another one from Green’s late uncle, both of which are uplifting and affirmative, open and close this collection of 45 poems, prose poems and poetic prose. The cover art, designed by Ronnie Goodyer, is a neat depiction of the “door of cool cerulean blue” that features in the opening poem.

Green describes her book as being “a love letter to Cumbria” and most of the poems to be found in this collection are rooted and grounded in the south and west of the county. Green is very much a poet of place. Almost a quarter of the titles contain place names which help the reader to place each poem in context. In ‘Fishing on the outgoing tide’ a glut of place-names make up almost an entire stanza and there is music in each name:

Swing your gaze around:

Green is a poet of wide open spaces. Her poems are populated with stones, fossils, ammonites, ferns, “whorled worlds” that are “ready to take flight”, frosted teasels, sea asters and fozzy bogs. More birds fly through these pages than I have ever counted before.

All the senses are employed here: we listen to water, see a mother-of-pearl sky, hear a curlew, smell honeysuckle, dog roses and meadowsweet. Wherever she is, Green catches the moment as well as the movement, not just of birds in flight, but of tides and seasons, the ebb and flow of our lives. Green moulds her persona into the “skyscape and landscape” until she is “the swallow-scythed air of summer”, “the eider duck’s astonished aww”.

There are some arresting images too: “Black Combe’s bulk is cotton-woolled in kettle-steam cloud,” there are frogs with “stretched balletic legs”, and there is the Hopkins-like “wide-winged verses of song” that are “wing-spread low-tide flit-flight light-tilted / blown along froth”.

It is hard to fault this collection and as a critic I do not set out to find fault deliberately. Having said that, however, the opening poem ‘Listen’ strikes me as being curiously out of kilter with the other poems in the collection in terms of accessibility. I would also add that the list poem ‘Samhain: A Door’ does not work so well for me as some of the others in the book and a handful of the texts written in poetic prose read more like diary entries which may be all that they are meant to be. In ‘Giving voice’ the repetition of a curious typographical symbol remains a mystery.

These niggles aside, poems such as ‘Lake Bank, Coniston Water,’ ‘I am no longer myself on these sands’ and ‘Moth, Eycott Hill’ are full of beauty. Here, where she completely absorbs herself in her subject-matter, we see Green at her very best.

These closing lines from ‘Moth, Eycott Hill’ will give readers a flavour of some of the delights to be found in this collection:

Today a moth split me open.

Its soft dust on my right fleshed hand

just below my forefinger between it and my thumb.

It stayed there, the moth, bright and settled

before flying off, its underwing orange.