The Houses Along the Wall: Karen Hayes, Holland Park Press 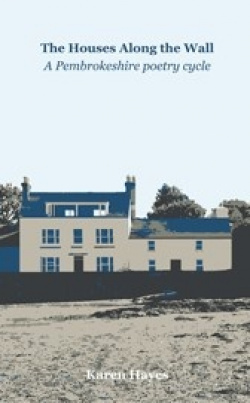 I may well have fallen for this collection before I read it, as soon as I heard of its subject matter. The set of poems in The Houses Along the Wall creates a fictional history for 16 of the buildings along the Parrog, the old port area of the coastal town of Newport in north Pembrokeshire. I visited Newport a few summers ago, and must have seen those houses.

Karen Hayes explains in her preface that she and her family were summer visitors who came back year after year, sometimes bringing friends to join them there. The first poem, ‘Tessarae’, tells of the pieces of pottery that were found by her family on the beach at Newport and introduces the rest of the collection, which is made up of stories inspired by those shards of broken crockery thrown up by the tide.

‘The Wedding Breakfast’ conjures up a Miss Havisham-like onlooker, the “ghost at the feast, a smudged photo’s edge”, watching from her window as the guests at someone else’s wedding arrive,

Down the winding path of outstretched hands

It’s a picture partly built from those salvaged pieces of beach crockery of course. There are more windows in ‘Wax’; they house candles lit to await fishermen home for the sea, lit in different homes and with different emotions:

How many candles flickered

On that out-breath of relief:

Or disbelief: He’s not.

‘Watermouth’ captures the drama and hazard of the river Nevern at Newport, which can only be crossed with extreme care at low tide. The colour of a garment warns of danger: “Now there is only the stain of you on my heart / And down on the beach a blowing hem / The flag of your red dress.”  ‘The Ferryman’ has previously taken two fares “who cross / On the same days but never at one time, / Yet always come back together.”  Until one day when “she won’t wait” and wades into the river …  This is not seaside-postcard stuff. In ‘Exposure’ there are “hellish back areas” where “fish bins, / Slippery with guts, roll rotting” and the sea hurls up its “midden content’ at front doors.

In her preface to this collection Hayes talks frankly of how she and her family and friends became very aware of “the holiday home phenomenon”, involving the “simultaneous decay and preservation of a way of life”. She concludes: “We were both part of the problem and its solution.”  In ‘The Kayaks’ she addresses the problem head-on:

Kayakers are the new breed on the Parrog,

Crowding the boat house bar, they block the light,

Tourists are both a blessing and a blight.

As stealthy as egrets, landing once a year,

Weighed down with bargain booze and frozen clams

Purchased from stores in Cardiff or faraway London,

‘The Belgians’ tells of more welcome incomers, refugees from a country that had been overrun: “They spoke Welsh better than most boys in the village / And understood that we were the English here, / And therefore also foreign.” ‘The Misses’ again has the strength of a short story, about twins who divided their house in two, despite the pleas of relations.

One of the last poems in this collection is also the longest and the most remarkable. ‘Four Floors for Suzy’ imagines Suzy Lamplugh, a 25-year-old estate agent who went missing in London in the 1980s and was never seen again, playing hide and seek with other children among the four floors of Ondara House, her family’s holiday home at Newport. The poem does not mourn Suzy but instead empathises with and celebrates the high spirits of childhood and holiday games and adventures as it pays tribute to a “little lost girl / Who is still playing hide and seek. “

Karen Hayes’s background is in theatre and from there she has moved towards lyric and libretto writing and poetry. Newport is situated towards the furthest reaches of west Wales and is close to the Preseli hills, home of the legendary Bluestones of Stonehenge fame. But whether you know the area or not, this is a collection to treasure and savour; a sequence about a beloved family holiday destination that sees beyond and beneath the rose-tinted view of the tourist, as it catalogues the “smell of time’s accumulated seasons … the tang and singe of driftwood”.

Karen Hayes, The Houses Along the Wall, Holland Park Press, £8

If you are looking for one of the best portal http://addprinterwindows10.com/ which will let you know about how to add printers in windows 10 and will also provide you all information in the form of images. Try out for once.