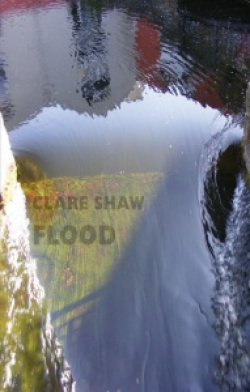 Floods inhabit myths, legend and our psyche. From classical tales and bible stories they appear throughout our literature. The flash flood in DH Lawrence’s The Rainbow springs to mind, as does Tom Weir’s poem ‘Monsoon’, where men wading up to their waists in water hold children above their heads “like an offering to a god nobody believes in.”

And there’s the rub - floods serve as allegory and metaphor through which we can chart the course of environmental and personal disintegration. Increasingly, on our climate-changed planet, we can now regard floods as a regular occurrence. Just ask the people of Worcester, the Somerset Levels, York, Pickering and Cumbria. Afterwards there is a reckoning; the victims of flood, depending upon their personal beliefs, look to reach an accommodation with God, the gods or themselves. They look for a rainbow perhaps from which to glimpse some kind of promise for the future.

Clare Shaw has published three books with Bloodaxe. She is based in Hebden Bridge and, unsurprisingly, this collection is called Flood.

She has been this way before. In her 2012 collection Head On, and the poem, ‘But drowning’, she wrote of

The weeds in the dark

And always there, waiting –

a current to seize me and freeze me and take me

out way too far. Way too deep.

It is a reminder that Shaw honestly and skilfully addresses her personal issues through wider references. The natural world is in turmoil; the individual must seek sanctuary. When you have grown up outnumbered, talking the wrong talk and laughed at and spat at, could Hebden be that haven? She doesn’t glamorise or sentimentalise the Pennine town of “rain blowing sideways/on communal houses in minus ten winters”, but she recognises that it is a place of “peaceniks and loonies of various colours”, a place of poets where the sun shines on the stone. There is a sense of affirmation in her final couplet to ‘Who knows what it’s like’: “I grew up outnumbered, one hundred to one. / I found my own people. My kin.”

This is a good place to state a position, to make a stand, and the opening poem in the collection, ‘What do I know’, does exactly that. Or does it? Do the bald assertions simply introduce doubt? For this is a clever (not a pejorative term) poem. With a question mark attached to the title it would take on a whole ambiguous feel, not so much a statement but a confession of “not knowing”.

‘What do I know’ is in essence a list poem, one which might be grasped by workshop leaders up and down the country: write a list of things you know. And it looks deceptively easy. But the seven stanzas here, each of five lines or more, are not simply a number of disparate ideas. Instead, each item interlinks and unifying themes emerge: “I know I am not registered to the correct address,” “I know cigarettes are bad for me,” “I know unstable rocks can ruin your day,” “my father tasted of smoke.” And as the reader begins to untangle the various strands - the security of home, health and well-being, climbing and navigation, and parental relationships - the reason for placing this poem at the beginning of the book becomes obvious, as it serves as an ideal introduction. By the end of ‘What do I know’ Shaw accepts that the sum of her knowledge is unfounded: “I know there are 10²² stars in the universe / but I don’t know how many that is.”

But a basis for reading the book has been established. There is a knowing, but not knowing present, a making sense of that which makes no sense, an attempt to draw conclusions about a flood that devastated a whole valley and a deep reflection about instability and dislocation.

‘Rainhill Psychiatric Hospital 1992’ has a self-explanatory title. It tells of suffering, of how the years were like water (that image of flood again) and “how they dragged me under” to leave her alienated, dumb and unbalanced, a bleak situation in which to be. But this is not a victim’s tale or a sufferer’s lament. Pulling through is possible,

Out of my element, I learnt to swim

and was never alone.

We were legion and we came from the stars …

It is a reassuring image of individual resilience and strength of unity, but the poem does finish with a chilling reference to the scars which remain:

Nobody intended this story

but I have written it down

This ability to invest a seemingly simple poem with a pay-off line like a punch to the stomach is a compelling feature of this collection, as is the adoption of story forms which are normally associated with more innocent narratives. ‘Grim’ for instance, which features children in a forest, woodcutters and birds singing, must be a fairy tale, surely? But the language is uncompromising and the intent is direct. Children suffer, allusions are made to predatory sex rings and paedophilia, while those who suspected it and guessed it, “did fuck all about it”.

I highly recommend Flood. Like the scene of a car crash, I was attracted and repelled by it, by its overt invitation to voyeurism and its sharp jog to human empathy. Calling this collection a response to a town’s flooding does it scant justice; it is a howl against suffering. But outrage is not enough, crafting must come to the fore and through 46 poems  Shaw demonstrates her command of subtle rhythm and intriguing internal rhyme. Sometimes deceptively simple in their initial appearance, on further reading all of these poems reveal a deep level of profundity, leaving a mark as indelible as the high-water line of a receding flood.

The Poetry of Spirituality ►