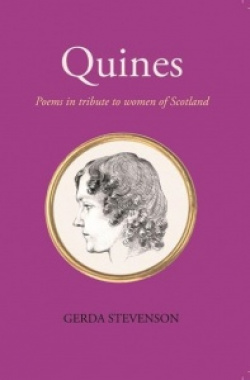 Gerda Stevenson is well known as an award-winning actor, director, musician and playwright, but is less well known as a poet. Her first collection was the autobiographical If This Were Real (2013), which was also translated into Italian and published in Rome in 2017. Her new collection, Quines: Poems in tribute to women of Scotland, published on International Women’s Day this year, celebrates 68 women across a great sweep of Scottish history. Quines is a word from the north-east of Scotland which means simply “women”.

Inspiration for her collection came in 2013 when Gerda was filming for the TV police series Shetland, and she saw the reconstructed head of a young neolithic woman in the Shetland museum. “Five thousand years between us, and yet / not a moment, it seems.”

This first poem sets the scene and the mythical Nessie, the Loch Ness monster, fills in the backdrop: “I carry all our stories, from long before / the Romans named the Picts, and I’ll elude / your sonar probes and camera clicks — / I’ll only rise when you can see / beyond the surface, fathoms deep.”

She gives voice to Teneu, later known as St Enoch, mother of St Mungo, the patron saint of Glasgow. She remembers Unn the Deep-Minded, mother of Thorstein the Red, sometime Viking ruler of the northern isles, Caithness, Sutherland, Ross and Moray. We are carried along with the story of St Margaret, queen to Malcolm Canmore; and with the defiant Isabella MacDuff, countess of Buchan, who crowned Robert Bruce at Scone in 1306 and was imprisoned by Edward I of England in a cage hung from the walls of Berwick castle: “I dinna feel the cauld ony mair / in ma tatterwallop goon”; and we are present at the abdication of Mary Queen of Scots: “Tak ma croon, an dinna fash — / aa yon wis ower fur me lang syne”.

It’s not just the great who guide us through our story. Hauf-hingit Maggie, who survived hanging in mid-18th century Edinburgh for the then too-common crime of the alleged murder of her illegitimate child, says of her prison cell: “Embro Toolbooth’s a dowie jyle”. There is a salute to the 11 women of Scotland’s team in the first recorded international women’s football match, Scotland v England in 1881. “The wind was against us — but wasn’t it ever? / We had all to play for, and nothing to lose.” They beat the English women 3-0 at Easter Road in Leith. The marriage bar, which decreed that women had to retreat to the household after being wed, is highlighted in the poem about artist Dorothy Johnstone, who had to leave her job at Edinburgh College of Art in 1924: “… another good woman consigned to the grave of wedlock”, her pupils remark “as if there’s been a death”.

The fighters are there with Fanny Wright from Dundee, who emigrated to America in 1818 and became a leading feminist, abolitionist, and social reformer; Chartist Helen Macfarlane, who translated the Communist nanifesto from German to English in 1850; Helen Crawfurd, the early suffragette and later Red Clydeside and communist party activist: “I’m on the march with Mary Barbour’s army … Rent strike we are not removing”.

The champion swimmer from Motherwell, Nancy Riach, appears “in her plain black doukers, fur aa tae see”, and the Gorbals children who appear in Joan Eardley’s paintings are fascinated by her studio, where the “turpentine kickin its stink up yer nose / gies yer snotters a rare tang!”. And we have a Church of Scotland missionary Jane Haining, who was murdered in Auschwitz: “Aa ma bairns I ken will go tae heaven, / and I am number 79467 / fur lovin them — stampit wi tattoos / fur mitherin Hungary’s orphaned Jews”.

This is an inspiring collection giving voice to the many women of Scotland whose presence would otherwise be in shadow. Gerda Stevenson’s language draws on the vernacular of both the east and the west of Scotland in vivid phrasing and vocabulary. Don’t worry though, there is a comprehensive glossary.

She won the 2013 Yes festival poetry challenge, and was awarded the Robert Tannahill poetry prize last year. She has been performing her work at the Edinburgh International Book Festival and the Edinburgh Fringe this year, and delivered the 2018 Thomas Muir memorial lecture in the city, based on Quines.

Murray Armstrong is a retired journalist and author of The Liberty Tree: the stirring story of Thomas Muir and Scotland’s first fight for democracy (Word Power 2014).