No Homeless Problem: Voicing the Struggles of Homelessness 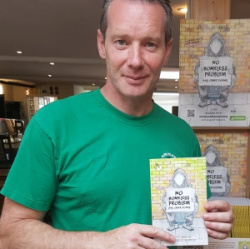 No Homeless Problem is a moving collection of poems by Irish writer Séamus Fox (pictured) based on the real life stories of 44 people who, like Fox himself, have experienced homelessness and are now being supported by local branches of the nationwide UK charity Emmaus. Each poem invites the reader to understand the issues surrounding homelessness and the reality of living on the street. This powerful collection of poetry has allowed individuals to voice the struggles that hundreds of homeless people face daily.

The writer has battled alcoholism and experienced homelessness himself when in 2015, he moved to London to find work but found himself homeless after several months. Eventually he found Emmaus and he now works and lives at the Cambridge Community. He undertook the writing of this book to give back to the Emmaus family that he feels such a part of, but also to raise awareness about the serious social issues surrounding homelessness and addiction.

In an interview with Write Out Loud Séamus told me: “I have been using poetry for three decades to understand myself and the world around me and to try and express myself. I had a difficult background which meant I struggled with normal interaction but poetry meant I could express myself in the realest sense. What I write is the closest thing to how I feel at the time of writing. I can sometimes still struggle to interact normally although I have gotten much better in the last 7 or 8 years. If I choose to highlight anything poetry is my preferred medium, although I write in other formats poetry is my main outlet and it is the one I love the most.”

Speaking about the book, Séamus said: “I wrote this book to give an insight into how different people may become homeless and how they attempt to survive on the street. I want people who have never been homeless, or who have never known homeless people, to search in their souls for shreds of compassion.”

I asked him about the responses he received from the people whose stories contributed to the poetry in this book.  Were they happy to be included?

“The book was meticulously planned over a long period of time. I choose the communities I was going to approach to go to and get the stories. I went and stayed in each community for 3 to 5 days while I gathered the stories to write the book. I was very transparent throughout the whole process and I did tell people exactly what I was doing. Most people were fine because I also told them it would be completely anonymous.  I am the only person who knows exactly who the 44 individuals who contributed are, it wasn't documented anywhere except in my head!  Throughout my journey I did still meet people who did not want to get involved even with the anonymity clause, sometimes people’s experiences in life have been so troubled and tumultuous that they stop trusting other human beings.

Emmaus UK President, Terry Waite CBE, said:  “Anyone who may have casually dismissed homeless people as being parasites should read what Séamus has written. It is insightful, moving and compelling. The writer has the gift of language and is able to put into verse the feelings and aspirations of many.”

There are currently 29 Emmaus communities across the country, supporting more than 800 people across the UK who have experienced homelessness and social exclusion. In addition there are five Emmaus groups, all of which are working towards setting up an Emmaus community in their area. Emmaus aims to offer 1,000 companion places by 2020.

No Homeless Problem and other poems by Séamus Fox is available at Emmaus communities across the UK for £7.99 or online here.

Well done Seamus.
Have tweeted this article and bought a copy of your book. Looking forward to reading your poems.

Link to purchase book is below although take care as I just noticed it's not a secure site.

What a unique path to embark upon with poetry in the back pocket. Good for him, hopefully the words he wrote are read by many, and enjoyed by even more.