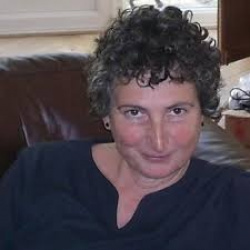 In the final part of a series of articles exploring the idea of omphalos, or the origin of the poet’s imagination, I asked poet and academic Gail Ashton (author of Ghost Songs and The Other Side of Glass, published by Cinnamon Press) what her thoughts were on the subject. She writes as follows:

I was interested to read Yvonne Reddick’s recent citation of Stan Smith and his suggestion that the condition of twentieth-century poets is characterised by enforced or voluntary migration. My own writing, poetry and prose, comes out of a place I call home which is somewhere both historically real and a fantastic re-imagining. In a recent blog, ‘How to let the soft animal of your body love what it loves’, Jan Fortune reminds us that the word nostalgia derives from to return home and also pain, something that gives rise to a condition she terms acute homesickness.

Our family history includes Irish famine and probably traveller migration as well as a family life marked by estrangements and enforced house moves. These physical and psychical ‘migrations’ drive much of my work to draw upon an abiding yet nebulous sense of loss. Home for me and my work becomes nostalgic, a place of exile – literally from Ireland to England or, more simply, as in a relocation around the time of the Millennium, from the midlands to the north – and often a site of refuge too.

Whether in dreams or endless internal, half-remembered rhythms, I walk the de-familiarized landscapes of inner-city Birmingham and its rural environs almost as often as I walk the hills, fields and woods of my present home-scape or the wild, coastal emptiness of Northumberland as often as I can. Being out of doors, walking, even the garden, has its own physical utterances and sonic patterns as inspirational to me as my home dialects. I am constantly attuned to those flat vowels, the rhythms of its intonation, those dry, deprecating, even insulting, exchanges, just as I’m aware of the language of trees, moors, open skies. All of this finds its way into a well-spring of stories and half-heard asides that become poetry, shaping its detail, and its emotional and tonal textures. It feeds too into other writings such as my forthcoming Not the Sky, a memoir with a twist which is in its own way in direct conversation with the kinds of things I outline here.

If home is a safe space from which to live and create, it is also, paradoxically, a place from which I want to escape when I’m in the stranglehold of illness. No-one wishes to be defined by life-long or life-changing illness. Yet all of my published creative work so far has come out of that peculiarly dislocating yet liberating place. I call this space home too. Its extremes are perhaps best described as being cast adrift on a migratory passage without end, hence the fictional sea-voyage that frames my last poetry collection What rain taught us, where a return to home has its own perils, being always so altered at the edges that it becomes a new loss from which to write out of.