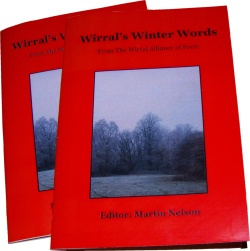 Apparently, less than one percent of the world’s authors, writers and poets are published, and when I say ‘published’ I’m talking about published in the old-fashioned sense. Where a third-party deems your work suitable, worthy, and now MUCH more importantly - COMMERCIAL enough to publish.

So, given THAT information, it would seem that the notions, concepts and ideologies that have influenced the whole of the literary world are left to the responsibility of just a few. The remaining ninety nine percent of us also-ran writers, authors and poets are consigned to the heaps of on-line poetry websites. Futile poetry discussion forums, and worse still - inclusion into that dark and sinister world of self-published poetry anthologies…

Some foolish, or rather naïve individuals, still believe that being ‘published’ is the only measure with which to gauge their literary success. It’s not. In fact, in some cases it can have the opposite affect. Most of the poetry anthologies that I’ve read are a written version of those awful music compilations such as ‘Now That’s What I Call Music…’ that churn out a whole heap of banal, foot tapping popular music from smiley- faced manufactured boy bands and their pouting female equivalents. Stripped bare of these ‘bands’ musical and lyrical contribution, you’re left with nothing more than whole heap of penises, silicone filled lips and mammary glands and styled synthetic curly hairpieces. Now That’s What I Call Manufactured Toss. But in a commercial but disappointing sense - it works.

How about publishing something just for the sheer LOVE of poetry? A tangible keepsake, a reminder of your passion for words and in particular how words can come together and form what’s not even an agreed concept - the troublesome subjective world of - poetry? Would anyone be foolish enough to publish such a document? Of course they would - Anthologies.

Edited by Martin Nelson, ‘Wirral’s Winter Words’ (WWW) is a gathering of poems from a collective known as ‘The Wirral Alliance of Poets’. The book’s synopsis clearly and boldly states:
“…Though small, this collection is comprised of work from some of the best loved, and most talented writers from the small Wirral peninsula. Inside this loosely themed collection, you will find poems that will make you laugh, think and maybe even inspire…

I’ll take my inspiration from just about anywhere - and if it lies secreted inside the humble folds of 50 pages of a loosely themed collection then so be it.

The first few pages inform the reader a little about the book’s 22 contributors - some of whom I am more than familiar with - while others benefit from a certain unknowing anonymity - although what appears as a common thread is that none of them appear to take themselves or their writing too seriously - well, maybe with the usual odd exception?

Poetry anthologies are only as strong as their weakest link and if my rusting wobbly-wheeled bicycle was to rely on the poetic chain of Wirral’s Winter Words to propel me on a reading journey then I’m afraid there wouldn’t be enough energy to thrust my demanding frame more than a few feet - on level ground. However, I was determined to have a journey of sorts, so, I pushed my imaginary poetic bicycle to the top of a steep incline and free-wheeled, free-spirited into the cold winds of Wirral’s Winter Words - and, rather daringly, and to exaggerate the pleasure, I was naked, riding ‘no-handed’ shouting at passing motorists, waving my pillar-box red copy of Wirral’s Winter Words into their shocked, open-mouthed faces - and who says that poetry’s boring? After falling back to earth with a thud of realisation and into the safety of a cushion of clichés - I was six lines into the book’s first poem - my mind already drifting and unable to concentrate.

That’s what happens when you begin to pull those fine hairs of running rhyme from out of a poem, or swat those annoying flies of full forced rhymes. But these were minor infringements compared to my comprehension of a poem titled ‘Three Cats’. It begins…
Three cats crap in my garden -
One black, one ginger, one white -
And I quite understand -
I really do
A cat’s inalienable right to poo -
but
each evacuation
in this choice location
isn’t welcome.

And if that isn’t cause for concern, the following ‘stanza’ has a typo! Which not only smacks of a lazy editorial eye, it reinforces the clumsiness of this ‘loosely (falling apart at the seams) themed book’.

From a personal perspective page 21 is where the elastic of laboured poetic clichés finally snaps - leaving us with a few poems that at least show an awareness of a poetic turn, choice of language and something/ANYTHING at least that doesn’t sound or read like it’s been written by a naïve adolescent.

Malcolm Saunders writes a piece titled ‘In Poetry’ that’s shaded with a hue of Dylan Thomas, but this too is laid out with an annoying typo. A typo that not only distracts a reader - but edges toward fuelling a reader’s despair and this is where the loose ribbons of the book’s theme begin to tangle and wrap themselves into my imaginary bicycle’s spokes.

Christmas is synonymous with a British winter and at least three poems lean toward the festive theme. But the content and various styles quickly thaw with the heat of a reader’s bemused thoughts into just how any of the book’s content qualify collectively as poems that actually make you think, let alone ‘inspire’?

Individually, a few of the poems stand head and snowballs above the rest. Steve Regan’s contributions. Ieuan Cilgwri’s efforts. Liam Brayd’s sensitivity. Jason Richardson’s humour. Lizz Clark’s poetic awareness. Ray’s surrealism, but most of the contributions are covered in an average layer of frost. The last four lines of one particular poem are indicative of the anthology‘s overall quality.
…Resting in peaceful alertness.
Here I be.
Who am I?
I am who I am.
The very notion of ‘resting in peaceful alertness’ may not make much sense out of its original context - but I challenge anyone to decipher just one of the book’s ‘loose themes’ away from Christmas and that melting snowman of Nostalgia.

However, having said all that, the whole project should be commended. I’m aware that Martin Nelson spent considerable time and effort on this anthology - but its contents ARE open to an individual’s subjectivity, and being asked to pay £4.00 for a single copy is a little like having your trousers pulled down. In certain situations this can lead to a pleasurable experience - however, more often than not, it does little but lead to sheepish embarrassment.

It feels as if the book has been hastily cobbled together - which is probably not its intention and I would imagine that the motives for compiling the book were not literary minded but more a way of showcasing the work of some of the ‘best loved, and most talented writers from the small Wirral peninsula’. I’ve heard some of the poems performed at various Wirral poetry events and they DO sound better than they read on the page but winter has never been my favourite season - and to all those genuinely talented poets on The Wirral, can I just say - if the bed breaks - I’ll see you in the Spring.