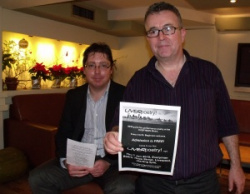 It will be a monthly event open to all – and giving everyone who wants to a chance to read / perform their work.

Both Ieuan and Steve already run well-attended poetry nights across the water from Liverpool in Wirral (MortonArmsLivePoetry, and the Bards of New Brighton, respectively).

Ieuan Cilgwri said: “We want to create something a bit different for Liverpool – an event where beginners can develop and flourish. We want to hear the sound of freedom issuing forth – and we want our poets to really enjoy themselves.”

Steve Regan said: “LIVERpoetry will have the same informal, lively, and good-humoured atmosphere which we’ve seen become very popular at our Wirral-based open-mics.”

The two promoters insist the club will be open to all types of poetry and spoken word art. Admission will be free. Both Ieuan and Steve are opposed on principle to charging admission.

There will be no set list system at LIVERpoetry. Each poet will read in turn – in short sets of no more than four-an-a-half minutes. That’s the system already used at the Bards of New Brighton – and it means that no poet will be told on arrival that the list is closed and he or she can’t read, which leads to disappointment.

The system should also mean that every poet who wants to will get a chance to read at least once and usually twice on each night.