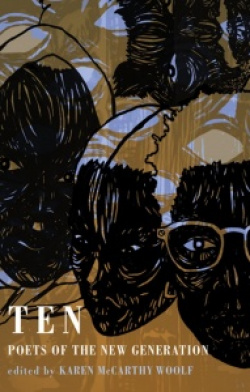 This is the third in a series of anthologies - the first  was published in 2010 - which were intended to correct a perceived imbalance in the publishing of poets of black and minority ethnic (BAME) origin. They were connected to a mentoring programme called The Complete Works, where emerging poets were advised by other poets. Some of the poets of both previous anthologies have gone on to be much more widely published, and there’s no reason to suppose that the same won’t happen to poets in this anthology.

So here are 10 more new poets setting out their wares for the reader. How do they sound? Well, very interesting and varied and musical in ways that bring new colours into poetry in Britain. Jamaican poet Kei Miller talks in a recent essay about the way poetry from BAME poetry has been dismissed in some circles because it seems to be rather less restrained than a lot of English poetry; and Sarah Howe’s first collection Loop of Jade, which won the TS Eliot prize - Howe is a previous recipient of Complete Works mentoring - was criticised in one review for being too flamboyant.

But what about the poetry? Omikemi Natacha Bryan’s Crownville concerns a “Negro” hospital where unethical experiments were conducted on people without their knowledge:

I prayed for Mattie, Hennie or anyone

who said they’d come but I haven’t seen kin

since the last light we had was snow.

This week Joseph and Mary were having a baby

and getting buried, which is why we made caskets…

The rhythms are sure, the voice compelling, and the music of the words is subtle; it has a solemn gravitas entirely in keeping with its subject. Another completely different poem is Yomi Sode’s ‘Won Ti De’:

bodies still warm from the gutting.

As you arrive, give her your names,

An elegiac poem commemorating the deaths of people killed because of racism, with a distinctly African feel to it.

There are lots of different musics in this anthology; these are but two of them. There are poets here with mixed race backgrounds, Chinese heritage, African and Jamaican. Here are a few lines from Jennifer Lee Tsai’s ‘The Valley Spirit Never Dies’:

My aunt speaks in the dialect

of the Hakka tribe,

a language I do not fully understand;

they flourish in adverse soil,

refuse to be trampled on,

I don’t think every poem here is fully realised, but there is enough good poetry here to satisfy anyone. As an introduction to interesting new voices in British poetry, this is a real winner.

excellent review. I own all three of these and believe this to be the weakest. However, there is certainly ample rhythm and life to sate someone thirsty for BAME poetry