Omphalos: A Return to the Source of Poetry 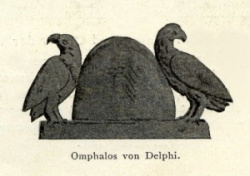 Omphalos: A Return to the Source of Poetry

‘I would begin with the Greek word, omphalos, meaning the navel, and hence the stone that marked the centre of the world, and repeat it, omphalos, omphalos, omphalos, until its blunt and falling music becomes the music of somebody pumping water at the pump outside our back door.’

As part of an occasional series in The Poetry Review, a guest poet is invited to write in response to the idea of omphalos, a place central to their imaginative world, as introduced above by Seamus Heaney.

In Ancient Greek, the word omphalos meant ‘navel’, and usually refers to a religious stone artefact. However, in the context of poetry, and how omphalos functions for Heaney, it can also mean the journey back somewhere – to our home, our parents, or formative childhood experience. The child is father to the man or woman, to paraphrase Wordsworth.

Such a place is often responsible in helping the poet to establish their poetics. It is here, the idea suggests, that themes are forged and obsessions or preoccupations find their starting point. It is often where the first stirrings of imagination can be recalled. It could be a view through a window, a secret garden, a landscape or coastline. Somehow this place becomes impressed on our psyche. It remains insistent and vivid, the topography forever seared into waking thoughts or dreams. A poet can often feel such a place is one to return to, the place regarded as a treasure trove of memory. Ideas and images can be mined here, time and time again. If originality is about returning to the origin, as Antoni Gaudi said, likewise the poet who is stuck or in need of reinvention may be encouraged to go back to the very beginning.

In The Poetry Review, the piece can be described as a kind of place writing. At first glance prose, the contribution also resembles a prose poem. It is understandable, given the usually personal and intimate revelation of where and how poetry began, that a standard narrative account soon begins to slip into a more poetic register. What is particularly beautiful and striking about the omphalos contribution is that the piece of writing is just that: a piece, a marvellous experiment in naming the indelible site of inspiration; it is a genre unto itself.

Poetry collections that are ore obviously based on a place or have been popular in recent years, such as Black Country by Liz Berry, or Wonderland by Matthew Dickman, which looks back to a childhood ‘of skateboards, skinheads and single mothers’.  Indeed the omphalos is not always a pleasant place to remember, and often it is associated with places of loss or trauma, which is one way of reading Yvonne Reddick’s Translating Mountains.

From The Poetry Review, past examples of omphalos can be found online, such as those by Colette Bryce and Bhanu Kapil. Keep an eye on forthcoming issues for the next instalment:

My journey or stirring place is more reminiscent of the Ouroboros than the Omphalos, as it constantly strives to begin anew by devouring itself and its past incarnations before starting again. Very ritualistic in that the journey to find a center and become better is never ending - in fact it only seems nostalgic until I peel away the crackling skin like a baked potato and find my place was there the entire time in the gray thicket and burnt briar.?