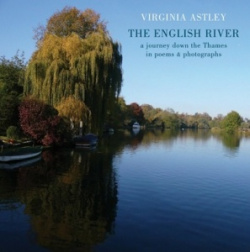 I came across Virginia Astley way back in 1983 with the release of her first solo album From Gardens Where We Feel Secure - an almost entirely instrumental piece that fused ambient sound recordings of the countryside with her subtle piano and woodwind playing. At the time the British indie music scene was in full swing with bands and singer songwriters from universities and art colleges signed to numerous small independent record labels such as Rough Trade and Cherry Red. Astley released the album on her own Happy Valley label which was distributed via the Rough Trade Cartel - a combo that ticked all the indie boxes for me.

Quite where her music fitted in back then is hard to tell even now. My mates thought her music was twee and that I was being a soppy and sentimental lovesick twit but I admired Virginia Astley and those other artists for ploughing their own creative fields against the grain and constraints of commercial music trends.

Fast forward 35 years and it was with some surprise that I read a review of a book of poetry and photographs by Virginia Astley that recorded her love of the Thames "and its hinterland: both the natural world and the people whose lives are intimately connected with the river”. The English River is Astley's first book-length poetry collection and amply showcases her many talents as poet, nature writer, storyteller and photographer.

I have a couple of connections to the Thames and therefore to this book. Firstly, my grandparents splashed out and lived the life for a while in the 70s with a static caravan near Marlow and a small motor cruiser which they never took very far because the locks were too daunting. But as a young teenager our family enjoyed several holidays exploring places featured in Astley's book: Goring, which was known for its locks, Streatley for its weir, Henley for its regatta, Mapledurham for its watermill and Cookham for its churchyard and association with the artist Stanley Spencer.

Stanley pushes his rattling pram
piled with paints, canvas and easel
through this sacred suburb, noting
each willow leaf, each red brick,
how pink the magnolias blush

Secondly, and a few years later on, a friend had studied for a while in London and lived in Wapping, a drunken stagger away from the famous Prospect of Whitby pub.

I see you back in that street in Wapping -
the cobbles, the peeling paint,
shadows on your young face
your slim hands clenched, air reeking
of damp clothes.
Like now, it was November.

Astley grew up by the river's upper reaches, the second daughter of Edwin Astley, composer of The Saint TV theme and similar shows. In recent years she has returned to work for a summer as a lock-keeper's assistant as well as walking the river's entire length “to record and respond to its landscapes, river life and river folk”. It quickly becomes apparent on reading these 30 or so poems that the river has flowed through and permeated her subconscious over many years of association; from the source where “late sun gilds the wheat / igniting grey-green lichen on dry stonewalls” to the estuary and its “nameless things covered in slime / sliding ever deeper each passing year”.

If you are a lover of nature, you will not be disappointed with the abundance of wildflowers, trees, insects, birds and mammals that sprout and announce their presence on almost every page. And the seasons come and go with the “quiet of snow” on Inglesham church and “that hot summer with levels low, a motorbike was glimpsed”. But it's not all idyllic peace and slow-moving waters. Astley plunges us over the first step of 'The Weir at Benson' where “rooks cackled and red kites paused in the space above” and there is no stopping the flow of water and words as the river rushes on “frothing with eddies / spooling, the undertow sucking, regurgitating, charging the air with a fresh, spinach smell.”

Like all good nature writers, Astley observes and then observes some more. At once the water is described as “dimpling”, at other times it's “running grey” or "still, milky-green". There are memories too, captured in “my remembered landscape, stored in my earliest self' and an unexpected dip into her personal past in the poem 'How did I ever think this would be OK?' which rather takes the reader by surprise after all the wildflowers that “insist their names are read aloud” in “a towpath recitative”. She continues this personal flow over the following few pages until with 'Old Songs' I am floored with emotion and struggle to turn the page and move on to 'Somewhere I'm not a blow-in' and, oh, how I can relate to that too. We watch on from the shadows as the Miller of Mansfield pub cleaner “gathers up cobwebs” and we are left once more to drift downstream.

By the time we reach the capital the skies are ashen as "300 Windermeres have poured in one month" and "sandbags slump in Wapping High Street" but the river waits "pockmarked by rain, holding its breath" as Canary Wharf looms into view and the author longs "to be somewhere / anywhere that could be home". Her journey along the Thames is coming to its conclusion and with it ours too. 'Beyond Greenwich' explores a more neglected stretch of the river where she finds 'the hulk of Scoundrel / lying rusting in Piper's Wharf' and the barrier that tentatively holds the future of the city marking roughly where "the channel meets the estuary, and further still, the sea" and we are done - except for 'Homecoming' which brings us back to those upper reaches ....

... time spiralling until you stand on the bank
watching the leaving geese flying low, understanding
you are on your own.

I particularly like some of the poem titles which hark back to those instrumental songs I knew so well in the early 80s. For example, 'I breathe as though I've been submerged and am coming up for air' reminded me of the wonderful With My Eyes Open I'm Dreaming and 'Sometimes, in this glittering world'  had me thinking of When the Fields Were On Fire. It feels in some part as if these poems are the lost vocals to that marvellous album which now comes echoing back through three decades to challenge my senses once more. It's Too Hot To Sleep seems an appropriate track to play as I round off this review.

I am so very grateful for this chance to revisit Virginia Astley's work, both in this new collection of Thames-inspired poetry and through her music which has lain dormant in my memory for so long. I rarely buy newly published books of poetry, but this was a must and a keeper and a dipper into that will sit proudly on my bookshelves alongside the best of my favourites.

thanks for reading Martin - much appreciated. Col.

I must confess to joining the ranks of those who have never heard of this lady, but your eloquent piece certainly makes me want to find out more
cheers Col

I just came across this recent interview with Virginia Astley in which she recites some of the poems in the book - for anyone who might be interested:

Nice review Col. I haven't heard of her, but will check her out. Thanks for the pointer too!

Many thanks for reading Keith - much appreciated. Col.

Colin,
Thank you for introducing Virginia Astley to those of us who have either never heard of her or are not acquainted with her poetry. I know some parts of the Thames journey to the sea but will now keep an eye out for Virginia´s work.
Keith