Point me at the stars: Noel Williams, Indigo Dreams 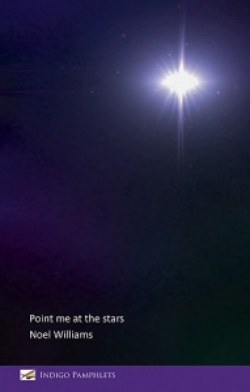 Noel Williams lives in Sheffield where he has been a key figure in its expanding poetry scene for many years. He has initiated group projects such as Speakers 2, Women and War, and offered invaluable mentoring support to many individuals poets. His 2014 collection, Out of Breath, was published by Cinnamon Press, he edits the online magazine Antiphon, and he is an associate editor for the print magazine Orbis.  He is emeritus professor of communication at Sheffield Hallam University.

The 28 poems in his Indigo Dreams pamphlet Point me at the stars are satisfyingly integrated, precisely as a reader might hope in a pamphlet, through their themes, images and forms. It is tempting to weave a narrative across them, especially since childhood features at the beginning with adult love a key focus later on.  But these poems are too subtle and elusive to form an obvious life-story-told-in-nocturnes. As such they repeatedly take the reader way beyond a particular image or turn of phrase, most often out into the night sky.

What I experienced repeatedly was the sense of being invited into particular spaces, primarily those of growing up, and of falling and being in love. Such invitations are issued confidently, allowing me to inhabit and come to know these spaces as places. In ‘Dusk’, for example,  it was delightful to take part in a journey along the River Cam — one I know very well — from Grantchester Meadows to Newton’s Mathematical Bridge in Queens’ College —“Newton’s perplexed bridge”, and afterwards to “plot the sky’s lines” out on the local Gogmagog hills.

This experience of moving into embodied spaces and places as a reader comes through early in the pamphlet. In ‘Fire Moths’, the voice emerges from “deep in the maze of the gate-leg table” which is “my drop-leaf childhood watchtower”.  We go on to see toy soldiers through the child’s eyes, a key strength of the pamphlet. Although its title, Point me at the stars, is an imperative, it is the poems themselves that lead the action, orienting the reader in a whole variety of directions, whether showing them into the intimate under-the-table world of childhood, or outside ‘Under Orion’, where

sometimes we hear music in silences:

a drift of the skies, a glacier shifting our senses

as if Orion strides. Petals cascade the street,

spark the hill, crack the earth with corms of starlight.

This is the night sky within or beneath which many of these poems are located, particularly the love poems. Though nature, darkness, the moon and stars have so often been the vehicles through which poets have shared their experiences of love, Noel Williams orients us towards them in a way that shows us love afresh. ‘Love Song’, for example, begins many of its stanzas with “she” and proceeds to list ‘her’ qualities, ending each stanza with the words, “which is why”. There are echoes of popular songs here. What we read is familiar — lovers always eager to explain ‘why’ - yet ‘Love Song’ offers us something strikingly clean and new. The perennial workshop question about cutting the last line did occur to me since the penultimate, “she is not mine. She is hers”, felt enough, especially with its confident shift in punctuation from “she is not mine, she is hers” in the poem’s opening line.

This review gives a small taste of the many riches in these poems. They are the beautifully crafted, accessible work of a poet whose words we can trust, and offer many more layers of insight and emotion than a reader might exhaust at a single reading.

Noel Williams, Point me at the stars, Indigo Dreams, £6 plus p&p