Upside down, or the right way up? Brian Patten's new poetry collection 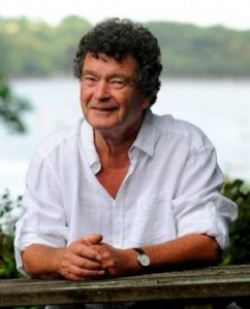 The renowned Liverpool poet Brian Patten has published a new book of poetry, his first collection for adults since 1996. In recent years Brian, who shot to fame with fellow Mersey poets Roger McGough and Adrian Henri in 1967 with the bestselling Penguin anthology The Mersey Sound, has introduced in his poetry performances a number of short poems laced with offbeat and often comic logic that have been inspired by Sufi mysticism.

The Book of Upside Down Thinking is said to be a “magical and unexpected” collection of short poems that he wrote while staying in Morocco, which are based on stories that are usually attributed to a character in  folklore, a trickster and wise fool much loved throughout the near and Middle East.

Brian explained: “In Turkey he travels under the name of Nazrudin or simply Hodja; in Libya and Morocco he’s Si’ Djeha, in Palestine and Iraq he’s known as Bahlul. In Sicily he’s Giufa. He has other names, and the multitude of stories attached to him are either humorous or contain a wonderful surreal logic:

I was walking along a river bank.

A man on the other side

Shouted, “How can I get across?”

“You are across,” I replied.

“They can be taken as stories and jokes, but they also help show the world from a different and unexpected perspective. Their aim was to rattle the cage of conventional thinking. Like some of Aesop’s animal tricksters, they’ve travelled through time unscathed because they address the eternal conflicts, hopes and follies of human kind."

When I broke the mirror I bought a new one,

Brian added: “Adapted into rhymes, The Book of Upside Down Thinking contains some of my favourite stories. Occasionally I’ve used them as jumping–off places and given them a different, more Western twist.  ' The Hammer's Revelation' (below) is an example. Others are originals, but could not have existed without Nazrudin’s inspiration.”

The Mersey Sound’s appearance in 1967 is credited with attracting thousands of people to poetry for the first time. Brian Patten has also written stories and comic verse for children, including Gargling With Jelly and Thawing Frozen Frogs.

While playing down the significance of his first new poetry collection for adults since Armada in 1996, Brian is nevertheless very pleased: “The designers have hand-drawn beautiful Middle Eastern tiles as illustrations, and the book looks fantastic.”

In the monastery the monk was banging away

Hanging an icon up on the wall.

The place was old, the monk half-blind

And the wall was itching to fall.

He hadn’t been out into the sunlight

For sixty years or more

So when a hole appeared in the masonry

He was amazed by what he saw.

There was a garden full of blossoms

Where in his youth a wasteland had stood.

The bees were drunk on pollen

And the world tasted good.

His soul had ached for paradise

For sixty years and a day

It was the thickness of a brick away.

He praises God for the revelation

And ignoring the work the hammer had done

He stepped out into the sun.

The Book of Upside Down Thinking is published by gift book publisher ForgetMeNot Books, and is available here

Background: Back in Liverpool where it all began

Background: Remembering a ground-breaking book of poetry, 50 years on

◄ Share the joy! A Write Out Loud guide to running an Open Mic

Poetry in Stratford-upon-Avon: a festival and a competition! ►