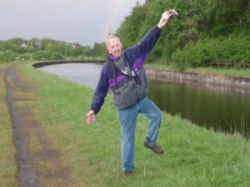 As April draws to a close, the new Write Out Loud Poem of the Week is ‘The Unlucky Vicar’ by Hugh. A light-hearted piece which shows that men of the cloth are as prey to human frailties as the rest of us. As you’ll see in his answers to the questions we sent him, Hugh is a man of few words who prefers to let his poems speak for him!

What got you into writing poetry?
Was intrigued by the rhythm and the rhyme embracing the content of the finished poetic  item.

How long have you been writing?
Been writing for about ten years.

Do you go to any open-mic nights?
No never been.

You’re cast away on a desert island. What’s your luxury?
Pen and paper so I can fill in my spare time relaxing and writing poems.

The Unlucky Vicar
by Hugh

Have you heard about the unlucky vicar?
Who drove down the motorway with too much liquor.
Shame on you sir,you should set an example,
Nearly four times over the limit after giving a sample.

Thinking God was on your side you jumped in your car,
Thee who spent too much time at the bar.
The Almighty was to deliver a terrible blow,
As down the M25 the vicar did go.

An off duty policeman in a chase did engage,
And pulled over the driver from the vicarage.
"Blow into this bag,oh my God 125,
Microgrammes in the vicar,on the M25!"

The Archbishop of Boozeberry bowed his head in shame,
When he heard one of his vicars had lost his good name.
The lesson is clear don't drink and drive,
Especially if you're a vicar on the M25.

Good one, Hugh - topic and construction. Interesting, I think - the use of 'unlucky'.

Well done on POTW Hugh and thanks for taking the time to read my latest. A bit of humorous writing here on WoL is always very much appreciated. Keep 'em coming. All the best, Colin.