There are Boats on the Orchard: Maria C McCarthy, Cultured Llama 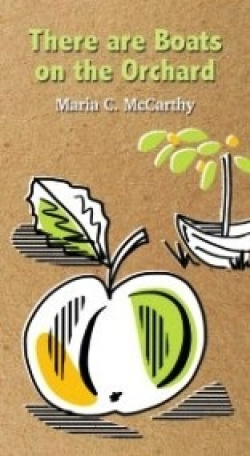 Author, poet and editor Maria C McCarthy, winner of the Society of Authors’ Tom-Gallon Trust short story award in 2015, has an MA in creative writing from the University of Kent. This  attractively produced, pocket-sized poetry pamphlet, designed by Mark Holihan with illustrations by Sara Fletcher, chronicles seven years of living alongside the disappearing orchards of Kent.

The orchards featured in these poems include ones located in Teynham and Faversham, north Kent and a former cherry orchard, now a housing estate, in Sittingbourne. Useful information at the back of the pamphlet is given on the Kent Orchards for Everyone project – a scheme that, along with others up and down the country, helps local communities and landowners to restore community orchards to their former glory and give them a sustainable future. Further information can be found at kentorchards.org.uk.

McCarthy’s poems are populated with seasonal workers, scrumpers, stray pheasants, pigeons, sheep, prowling cats and grazing ponies. The passing seasons are carefully observed and contrasted.  The abundance of harvest (‘Know your cherries’) is pitched against the sparseness of winter (‘The orchard in November’).

There is a sense of history here conveyed through the notion of change. It begins with a quotation from the Teynham parish council website which commemorates the fact that in 1533, Richard Harrys – Fruiterer to Henry VIII –established what was probably England’s first large fruit collection at Teynham and then, within the poems themselves, there are references to earlier and later events in history:  Chaucer’s Wife of Bath and the Canterbury pilgrims making their way down ‘London Road’:

Once the clatter of horses and carts…

Now the swoosh of cars in the rain,

and a stream of lorries

The people who own the orchards pass away, creeping development takes over the abandoned plots in the form of housing estates, spawned by urban sprawl. In ‘Strange fruits’, it is houses, not daffodils, that break through the earth in spring.

The title of this collection hints at displacement. What are “grass-locked vessels” doing in an orchard?  Displacement runs through the collection in a series of sightings. It is to be found in the image of the car on the footpath instead of the road, human detritus in the hedgerow, the juxtaposition of natural and manmade objects, of brambles and plastic boxes, blackberries and asbestos panels, plums and Stella cans. These ‘list’ poems bring out the best in McCarthy, they hold our attention with a surprise at every turn. In ‘Orchard Inventory,’ for example, she writes of

A ride-on mower in a hut with a broken lock;

a Black and Decker workmate; a plastic box;

a vacuum cleaner; bones; a shipping container; a swing.

It is telling that the very last entry that is mentioned in the inventory is trees.

There is also a sense of endings – of autumn, of shrivelled fruit as a metaphor for the demise of all the orchards, of trees being felled, of bulldozers, bonfires, planning notices and the burnt-out shell of a car.

This collection is a moving depiction of the changing face of our orchards, beautifully observed by a writer who cares deeply for the preservation of our natural world.

Maria C McCarthy, There are Boats on the Orchard, Cultured Llama, £7