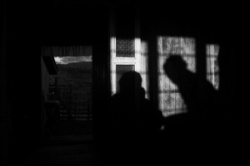 There be a stoner, a mighty old one, wrinkled skin, twisted toes, frail and fragile, as if a tiny little nudge can dismantle his assembled soul. He’s not a person, not at least now, may be once, but long forgotten. Now he is a shadow of a soul. He is fragmented so is his mind. He would talk you through rubbish and say nothing, but then when you least expect it he says the thing. Speculations, one at a time. He doesn't disclose his cases, he is not supposed to. He says, he is bound by the trade policy though he has no trade license at all! He was called a stoner since his existence was noted. Always seen rolling another after he finishes the previous one.
He sat on a finely maintained geometrically fashioned pavement away from the dull city traffic, distanced perfectly to avoid the metropolis but not enough to escape the echo! He always sat with his rug-packing kit; no one knew what was inside, none bothered! He used to take out only tobacco, when someone asked.

She would sneakily go to her backyard and practice. Yes, she had a backyard that she owed to the not so crowded suburb she lived in with her boring, rich family. Her father taught her hunting, she had never been to a forest. So she would satisfy her aim only through non-living beings, I mean, non-moving beings and sometimes those things would learn moving to help her aim better! She mastered the art of nailing but what she did a Phd on was her intuition! It is said that if you lack a sense you are blessed with another. It’s her intuition which has always saved her ego! She lacked proper speech. She had a short tongue so she could not speak properly and stammered when she did. So she chose silence instead. She has always been the innocent one in the family, but only from outside. Her soul carried a sword of an anarchist. She was vigil and violent.

When he woke up in the middle of the night he remembered an old song. He was humming that tune in his mind. Then he suddenly heard the sound just outside his building. The sound was strong, intimidating, disgraceful! Like a cat is dying and shouting from the core of its epiglottis! He started humming that song again. Lit a cigar. Started scribbling a catty-crime story. He wrote a story of a lonely widow. The girl of his story loved crosswords. She loved wearing velvet. She wore her favourite blue velvet the night she was murdered. He even doodled her perfect blue body. She looked ecstatic! She was killed with a drug called ‘velvet vagina’. She always used to take substance before suitable silly parties.

He looks through a peep hole. He is a local newspaper supplier. The locality is dingy. And he perfected the art of sneaking in through uneven passages. He loved speed and silence. He would notice every damn thing that he was never supposed to. He loved wandering in places where it was forbidden. So he was an efficient informer of the local hobo police. It’s a tormented anarchist township where people like him were not only appreciated, at times even rewarded. He is a young fellow, still in his teens. He loved peeping through bathroom doors and observing forbidden curves.

The victim is now introduced in the plot. She was in her thirties when she died. It was one of the most normal deaths that could occur in a slippery bathroom, apparently. But off course it was not a normal one. Her head was smashed like a potato as if a nuclear explosion happened inside! Just before leaving for a hot bath she called her hunting mate. The police enquired Omega, interrogated what exactly they discussed that day. Omega was disgusted with the graphic details the victim’s body carried. She wished if she could have avoided her conversation with the victim today!

Omega couldn't escape the thought, ‘ahh, she loved crosswords’. Her apartment was situated just behind the park the stoner chose for his stardom. By now you should guess, the stoner, the hero of our story observed a great many things. He knew it all.

*Times that the witches have woven  or, a blast from the proverbial past* ►