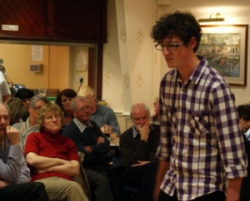 Studying Linguistics, which includes the rather dry sounding subject ‘Advanced Phonology’, is similar to drinking heavily. Each pastime has an adverse affect on your brain’s physiological capability, although the latter does tend to lend itself to the former - insomuch that in my particular case, drunkenness brings about the cooing and blurting of random articulated noises. Noises that Linguists have dressed into very pleasant sounding names.

However, as exciting as Phonology is, I couldn’t help but accept a recent invitation to attend at a fundraising event for next year’s ‘Wigan Words Festival’ organised by members of Wigan’s Leisure and Cultural Trust . An event kindly hosted by the town’s Cricket Club and one that promised a night of ‘Music, Poetry and Drama from a host of local talent’.

Any bubbling twangs of performance anxiety I felt were quickly extinguished when I was informed that I wasn’t being asked in my capacity as a ‘Performance Poet’ but more in the guise of ‘The mon who’s tekkin’ fohters’ - also known as - The Official Photographer.
For my services - I was to be rewarded in Wigan’s very own hard currency - pies. Actually, that’s not quite true. My talent was not deemed great enough for ‘pies’ - just the lower junior rate of ‘a’ pie… Ooh, and 'a by-line in't local paper'. With non-negotiable terms such as this - how could I possibly refuse?

The event was to raise money for next year’s Wigan Word’s festival as much as it was to raise the profile of young, talented and equally ambitious men, women, boys and girls from around the town. Individuals who have an association with Wigan in some artistic capacity.


If I’m being honest - I had this preconceived notion that it’d be another one of those events where I end up staring at the carpet tracing some abstact pattern into the weave with my sizeable brows, or gently tap the part of my head that’s losing its hair at a rate that now borders on ‘worrying’. Instead, those that were gathered - audience and performers alike - were all treated to some ‘wholesome, family entertainment’ - and while all this was going on - I set about earning my crust. Literally.

Tony Walsh, Louise Fazackerly and Terry ‘a scouse poet from Liverpool’, are all familiar names on the North West poetry scene. However, none of them may not have performed in front of an audience that contained as many children and as such their poems were suitably adapted for the young listeners and the innocence of their ear canals. Terry’s poems and his seemingly natural ability to relate with children shone through, but each of the featured poets performed with an assurance built on or around events held by our own Write Out Loud and when I say ‘featured’ I mean those that were paid in a currency that contains neither meat nor potato.

Just as the event was folding itself into a familiar shape along came the evening's first surprise. The Rotary Club of Wigan recently held a competition titled ‘Junior Speaks’ involving 14 junior schools in the Wigan borough. It was held in an attempt to help promote ‘public speaking’… and perhaps your reaction' just like my initial reaction, goes some way to explain just HOW understated this particular oration skill is viewed. It is, after all, just one gene away from the Performance Poetry monkey we know and love. Surely?

The overall winners, who performed for us on the night, were:
Olivia Hanley, Ben Kelly, Jack Dandy and Luke Jenner, and while it was difficult to insert an Uncle Joe between their performances, Ben Kelly was a complete natural at both performing AND orating. Usually, I find the idea of children performing ANYTHING quite nauseas, but Ben had just enough twinkle in his eye to suggest that he actually understood the magnitude of what he was saying AND how he was saying it. If that boy doesn’t go on to be the most successful Wiganer since Uncle George Boston - I’ll eat my signed copy of ‘The Road to Wigan Beer’ by George Oh Well.

It didn’t end there. Ooooooh No. After most of us had clapped our hands purple, we were treated to a youth drama production from a group of talented actors who collectively call themselves ‘Willpower’. They performed a playlet written by and starring Bryony Davies, a young aspiring playwright AND equally talented actor. Together with supporting performances from Dom Gane, Ben Wilson, Victoria Bates, Ben Cusick and Robert Forshaw they acted out the dangers of becoming involved in drugs and the pressures that some teenagers face when they rightly persist in just saying ‘no’. They left ‘stage right’ to more sincere and deserved applause.

The 'mature' thespians amongst us were not going to be out performed and so we were treated to a brief sketch that seemed like an adaptation of Bill Naughton's 'Spring and Port Wine'. The male actor - at a very quick glance - had of look of James Mason and whether this was an inspired piece of casting or sheer coincidence I have no idea?

Mark Ashley, the event’s Compére and all-round musical maestro, offered his guitar support to Martin Roughly, a young male vocalist who, unlike many of this year’s X-factor finalists, didn’t drop a single note AND sang consistently in key - and STILL there was more. A poetry open-mic slot for the diehard poets who need their regular fix of performance that gave us WOL’s Isobel and the inimitable John and Sandré Clays, before finally…the buffet. Ooh no, before finally…Matt Turner. A Wigan singer song-writer who held the audience spell-bound with his enchanting harmonies and mellow chords.

Before FI-NALLY…the buffet and pay day for Mr T.

I ate a sizable sum of Wigan currency. Nowhere near, I hasten to add, the combined fees paid to the evening’s featured poets - but I did my best to reduce the gulf between the two. As it turned out - the lighting wasn’t conducive to my particular style of photography - and should any event organiser wish to complain - all I can say is - you get what you pie for.