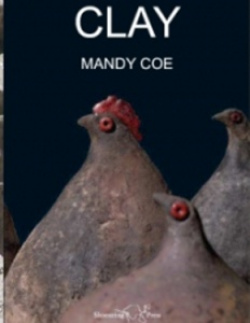 Mandy Coe’s book launch took place last month at The Parr Street Studio 2, Liverpool. It was a wonderful venue for a launch; a room that looked as if Austin Powers had a hand in its design full of oranges and reds, filmed flames flickering on a wall, comfortable leather sofas.

Mandy wanted the launch to be a celebration: of poems, of inspiration, of friends who have supported her along the way and so had created an event of poetry and music. The room was crowded; poets, Dead Good Poets Society supporters “on tour”, potters, café owners, book group members and a few Parr Street Hotel guests who had wandered in and had decided to stay. The evening began with music from Eithne Brown and Jimmy Barrett, a talented singer and guitarist duo who covered songs by Joni Mitchell, Carole King et al and set the mood that it was all about the words that night.

Then the poetry began. The Man in Black, a dapper, dude-ish Colin Watts, introduced poets who had been invited to read first a poem by Mandy and then one of their own poems: Sarah Maclennan, Jim Sharples and David Bateman read in the first half, Driftwood Press editor Brian Wake and Costa Prize-winner Jean Sprackland and Colin himself followed after the break.

Mandy introduced her reading by emphasising just how important performance poetry nights had been to her evolution as a writer. Then she read from Clay (Shoestring Press) her third collection, which includes poems that won her the Manchester Prize for Poetry in 2008. She requested audience involvement in a poem written for the late Matt Simpson, a poet who had nurtured and mentored Mandy throughout her writing career. Above a murmured chant of row, flow, blow, Mandy wove a rhythmic poem about the river. Someone new to poetry said after Mandy’s second reading that he’d “expected to enjoy the poetry, but had been totally transported by them” - an unexpected reaction and another poetry convert to add to the growing list.

Mandy’s skill is in weaving deeply complicated emotions and stories into deceptively simple language and rhythm. She is, quite clearly, an enormously talented writer and one to watch.

The evening ended with a performance by a Jacques Brel tribute band, Dead Belgian. Note perfect drums, accordion, flute, banjo and guitar, with a singer Fionnuala Dorrity who was a startling combination of Brel himself and Edith Piaf. The delighted grins of the audience said it all - what a way to round off a true celebration; a poetry party!

Your Stars for December ►