Poetry of borders: George Szirtes to read new poems at Before and After Schengen event 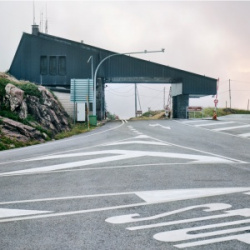 This poem below, ‘Somport’ by Hungarian-born poet George Szirtes, is one of a number of new, unpublished poems that he will be reading in London at Before and After Schengen, an event inspired by Ignacio Evangelista’s photography sequence After Schengen. In front of a screening of his work, Evangelista will talk about his fascination with Europe’s disused border posts. His talk will be interwoven with poems by George Szirtes, and framed by a performance of musical fragments and improvisations devised by violist Shiry Rashkovsky.

The event takes place at London’s Bridewell theatre, on Thursday 15 February at 1.15pm, and is being staged by Theatre Voliere, an Anglo-French theatre and production company from Strasbourg, capital of Alsace - Europe’s crossroads, and one of its many borderlands with a rich and turbulent history. It’s part of a season of events called Marchland, described as a “response to the crises of identity currently sweeping Europe.

“We wanted to create a season that was more enlightenment than light entertainment, a neutral space where many traditions could come together and ask: What can the voices from Europe’s liminal spaces, past and present, tell us about what it means to be European today?”

‘Somport’  is a mountain pass in the central Pyrenees on the border of France and Spain.

The final border will be marked as the gateway

to an invisible unknown, the limits of the self.

A dark single slope offers the way through.

No need to stop there now. There’s nothing left

of the old map, the known topography.

There are limits to topography.

It won’t matter whether you turn right or left.

Look at the markings. This is half-way through

a story without an ending. Write it yourself.

Make your way past the signs beyond the gateway.

◄ 'The linen is there as you left it, well-ordered'