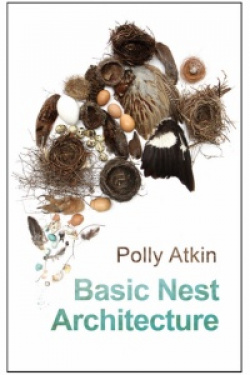 Polly Atkin teaches English studies at the University of Strathclyde and lives in the Lake District, an inspiration for much of her writing.  Basic Nest Architecture is her debut collection. At least a dozen of its poems have won,  been commended or shortlisted in poetry competitions, and an extract from it was awarded New Writing North’s Andrew Waterhouse Prize in 2014. Atkin also won the Mslexia pamphlet prize in 2012 with her pamphlet, Shadow Dispatches, also published by Seren.

Although the Peak District is on my doorstep and I get out there when I can, this collection made me long for a much more engaged relationship with the natural world. Cover notes describe it as “themed around three interwoven ideas – place as nest, the mind as nest, and the body as nest”.  Between its pages I found a distinctive atmosphere and sensibility. Its dedication reads “for the beautiful wild”, but as you read the poems the speaker and “the beautiful wild” become indivisible.  It is the poet’s embodied presence and her perceptual apparatus that makes the natural world accessible as a felt experience, rather than something “out there” that we visit and contemplate. Starting with a movement away from city and its “film of constant light”, where the speaker felt  “information bloom in my blood. It sang/in my cells” (‘Colony Collapse Disorder’), the embodied self and its surroundings gradually become inextricable.

Some of the poems do not give themselves up to interpretation lightly; others offer more straightforward entry into aspects of a lived landscape.   I enjoyed ‘The New Path’, which explores a path laid directly through Bainriggs wood in the Lake District, one that Wordsworth resented for the way it disturbed the tranquillity of the lakeshore. “Its public name/is Improvement”, says the poem (I love that capital ‘I’), beautifully laying out the distinction made by the anthropologist Tim Ingold  between “open”, meandering lines, without fixed destinations; and those, like the new path, that are “closed”, that  tell us “The world is for walking /over, not through”.  A similarly inviting poem is ‘When I lived alone’ which sets out the satisfactions of living alone in a house where “I slept curled up against the cool/stretch of its ribs like a cub”.

Yet this is no simple and potentially sentimental love affair with the speaker’s new home in the country. From its first line, this poem invites uncertainty: “When I lived alone I was clean. Good.” Is the speaker entirely committed to being “good”?  The poem’s detail, though – of drinking Rooibos, the pot of good black coffee on the hob – absolutely showed me what life would be like in this house. ‘Kindling’ similarly drew me into the speaker’s everyday lived experience during “the winter of fires that would not take” where “you piled all you could on your bed but still”.

The collection divides into three sections and as we move into the second one, the speaker’s body becomes increasingly blended with not only her immediate surroundings, the valley and its night-time noises, but also the galaxies that surround her , “the known and unknown/elements of our prowling bodies unfolding/from the blooming sky” (‘Strength in Winter’).  Yet, as in ‘When I lived alone’, these poems refuse to settle for certainty. In ‘Moving’, for example, the speaker fears that her house is flooding while she is away, that her “precious possessions” are perishing. Yet the poem ends with:

On the train you watch the storm through the window

redefine the sky and landscape you move through

not sure anymore if this is a fear

or a lightness of self

If section two explores loss or merger of the self, within either a landscape, another person or dreams, section three comprises still more mysterious, often surreal poems.  Illness and a sense of disorientation are evoked in ‘The Test’ and again in ‘Fog/Fox’ where “I watch Fog swallow/metre by metre the reliable matter//I thought I had figured”.  Even so, in ‘Free Night’, a wonderful “species of madness” fills speakers who “will scorch our sick selves off, turn/weakness to ash” and alongside so many troubled dreams and yearnings, this poem overflows with energy and determination.

These are poems filled with gorgeous imagery and a magical use of language. They reward re-reading and also researching their sources, taking hold of the ear and the imagination.

◄ Poetry of borders: George Szirtes to read new poems at Before and After Schengen event