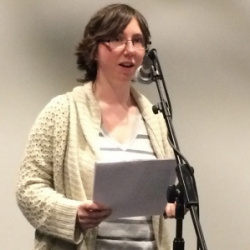 The winner of this year’s Wolverhampton literature festival (WoLF) poetry competition, Rachel Plummer - pictured at the awards ceremony - has a background in nuclear astrophysics, and has written a sequence of poems about aliens landing in Scotland. She describes herself as a “queer parent and poet” and is currently working on a book of children’s stories that retells Scottish folk stories from an LGBT perspective. She talked about all this – and more – in an interview with Write Out Loud:

Anyone who heard you read at the WoLF award ceremony will have been struck by the fact you have a background as a nuclear astrophysicist. An unusual background for a poet. Do you think it informs your poetry? If so, how?

I think my background in nuclear astrophysics does influence my poems, and that’s part of why I chose to study it. I’ve loved literature from an early age but I didn’t want to spend so much time analysing the books and poems that I loved that I ended up bored of them, and I didn’t want to be someone who could only write about being a writer.

I’m always impressed by poets who can write with authority and authenticity, and perhaps the key to that is writing about something in which you have a genuine interest and passion. For me, that’s always been physics. I think in today’s world science fills the role that mythology and folklore might have filled in the past – it provides possible answers to the biggest questions, explaining and describing the universe we live in. Scientists, though, are not always very good storytellers, and so we’re left frustrated by how inaccessible a lot of these answers can be. Science-based stories and poems are able to bridge this gap, and explore the places where myths and science intersect.

When did you first get into writing poetry? What inspired this?

I first started writing poetry at eight years old, thanks to a fantastic teacher. I loved reading poetry and he encouraged me to memorise a poem a week. Many years later, I still recall these poems word for word. I started writing poetry at that age, inspired by what I was reading. Later I was lucky enough to be taught by poets Stuart Henson and John Greening, whose influence hugely shaped my reading and writing of poetry. When I went into science my writing took a back seat for years, and it has only been in the last three or four years that I’ve started sending my poems out into the world again.

You also described yourself as a writer of sic-fi poetry. Tell us more!

I love science fiction, and I’m a big fan of sci-fi or science poems. It can be a niche subject, but you only have to look at the poems of Edwin Morgan to see how exciting and universally relevant sci-fi poetry can be. There are some fantastic poets writing sci-fi poems just now. For me, good sci-fi is an attempt to put modern world issues in a different context, and illuminate them from this new angle so we can see them with a different perspective. I’ve recently had my first pamphlet, The Parlour Guide to Exo-Politics, published by House Press, and this pamphlet is a narrative sequence of poems that imagines aliens landing in Scotland. But really The Parlour Guide is about migration, homelessness, poverty, gender, otherness, personhood … the sci-fi setting is a backdrop for these very present-day subjects.

You're working on a project for LGBT Youth Scotland, rewriting myths. How did this come about? What do you aim to achieve with it?

The project that I’ve been working for with LGBT Youth Scotland is a dream come true, a project that I had been thinking about since my daughter, now age six, was born. Reading children’s stories to her it soon became clear that there just aren’t books featuring families like ours, and I found myself gender-swapping characters in books that I read to her just to have some kind of representation. What queer books there are for this age tend to be instruction manual type books intended for a presumed straight, cisgender audience explaining to them what being gay or being trans is all about – these books are important, but what I wanted for my daughter was a normal story where some of the characters just happened to be queer.

I pitched the idea to LGBT Youth Scotland of a book of children’s poetry that re-told traditional Scottish folkstories from an LGBT perspective, so we have a non-binary Nessie, polyamorous lesbian giants, gay wulvers, a trans selkie and an asexual goddess, among many others. And I was so thrilled when they awarded me a cultural commission funded by Creative Scotland to write it! The book is now written and we’re in talks with a publisher – the plan is for it to be fully illustrated and released in LGBT History Month 2019.

Do you have any collections out which we can point people towards? Any readings coming up?

I have my pamphlet, The Parlour Guide to Exo-Politics, just out from House Press! There will be a performance of the Parlour Guide, with music from the Scottish Clarinet Quartet, at Lighthouse Books in Edinburgh on 20 February, 8pm. Weird sci-fi poetry! With clarinets! Don’t miss it.

Rachel’s winning poem ‘Iris, the oldest physicist at CERN’, along with the work of the other prize-winners and 40 shortlisted pieces, is in the WoLF poetry anthology, published by Write Out Loud, which is on sale for £6 +p&p. Email info@writeoutloud.net for details on how to buy a copy.