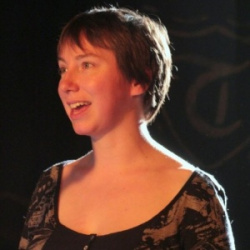 The inaugural WoLF poetry competition run by Write Out Loud on behalf of Wolverhampton literature festival - which took place over the weekend of 26-28 January - has been won by Rachel Plummer, pictured, with her poem ‘Iris, the oldest physicist at CERN’.

The competition’s judge, Emma Purshouse, said: “It was so difficult to choose a winner for the competition. I suppose all judges say that sort of thing, but it really was hard. The standard was so very, very high, and I can honestly say it was a pleasure to read all the entries. In the end I was carrying about 15 poems around with me and reading them again and again, in order to decide on a winner. Rachel’s poem had stood out to me from the start, not least by way of its intriguing title, which piqued my interest before I even read it. The poem worked on so many levels. It was beautiful in terms of the language, but it was also magical, mythical, and managed to make particle physics feel accessible!”

Rachel Plummer lives in Edinburgh, and has had poems published in Mslexia, Agenda, Dactyl, Poets Republic and others. She is currently working on a commission from LGBT Youth Scotland to create LGBT retellings of traditional Scottish myths and stories.

IRIS, THE OLDEST PHYSICIST AT CERN

In one direction, she releases an albatross.

In the other, a vulture.

Here, the wing meets no resistance

to its lust for acceleration.

small tunnels in the dark

where the God of Almost-Nothing could crack

The circle floods with flight.

The miles-wide circle with its cargo of feathers.

into a flock of gannets, hungry, crying

out at the shock of existence.

to reveal what you’re made of,

she says, but finds speech

Strange. She spreads herself wide as a wing.

She’s made for collision.

The runner-up (and winner of £150) was Wolverhampton poet Ros Woolner, with her poem ‘Sack of night’, while the three third prizes of £25 were won by Caroline Bracken, Terry Jones, and Phil Binding. Congratulations to all of you!

The competition attracted well over 600 entries from around the UK and further afield. The winners will be reading their winning entries at the award ceremony on Sunday 28 January at 12.30pm at Wolverhampton art gallery. Copies of the WoLF anthology, featuring the five winning poems along with a further 40 shortlisted pieces, will be on sale there.

Really glad you're enjoying the anthology, John. You're right – there's some amazing poetry in there. Thanks for coming down to the award ceremony, it was good to see you.

It was a tremendous event in a great venue with friendly people. I really recommend the Anthology, the quality and variety of poems in it is truly astonishing. Sarah Doyle's 'Owl' is one of the most powerful poems I've read in years.

Write Out Loud has produced an anthology containing all five winning entries and forty shortlisted poems.

Copies are now on sale through Write Out Loud from now until the end of February at a cost of £6.00 +p&p. To get your hands on a copy, simply email info@writeoutloud.net as soon as possible with your name, the number of copies you require, and your address, and we’ll get back to you as soon as we can with details of the total amount due, and how to pay.

Wonderful winning poem congratulations Rachel, and to all shortlisted poets.

The WoLF anthology, featuring the winning poems and the forty poems in the shortlist, will be on sale at the festival bookstall as of Saturday morning. Another good reason to get yourself to Wolverhampton!

Well done Rachel, the other winners and all shortlisted poets. Hope the Wolverhampton Literature Festival goes well next weekend.
: )