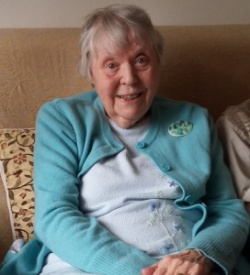 The West Midlands poet Win Saha, who was featured in an interview on Write Out Loud last year, has died at the age of 94. Win, a prolific writer and stalwart of the local poetry scene, wrote a poem every day, and her deadpan humour and witty poetry often had audiences in stitches. She was born in Altrincham in 1923 and worked as a journalist for the Birmingham Gazette and Evening Dispatch during the war, eventually going on to write a women’s column.

She later lived in Wolverhampton and was a regular performer at the City Voices poetry night. She produced many pamphlets of her poetry over the years, and sold them for charity. Offa’s Press also released a CD and pamphlet of her most popular work, called Win’s Top 30.  She was a real character, a true inspiration, and will be greatly missed by her many poetry friends. Win is survived by her husband Ranjan and daughter Sue.

Fifty nights a year, guest poets from across the spectrum at Ó Bhéal ►

I commented on the previous WOL post about this lady and her passing is a matter for both sorrow and regret. A
unique and admirable "voice" of reason and real life
understanding has been stilled. RIP Win.

Thank you, Emma, for capturing the spirit and life of 'poem a day' Win in your interview last year. It's now become a precious document, for us, and I'm sure for her family, too.