Sirenator: The Rise of the Machines 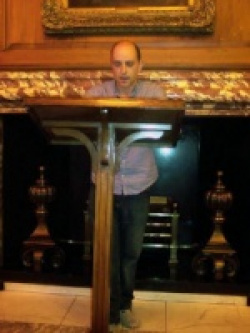 `Poems are little machines made out of words'. Which, apparently, is what somebody once said when asked to explain just what is a poem? The more you think about - the more this utterance makes some sort of sense. However, if you think about it too much, your head explodes just seconds after it's swollen to that disproportionate but equally comical size of say, Frank Sidebottom?`Little machines' is also the title of Simon Rennie's first published collection of poems, and although I am not over familiar with Simon or his written poetry, I have often marvelled at his level of knowledge both in relation to poetry and English/ American literature in general. Not to mention his attempts to theorise many of the `classic' poets and their work. Occasionally, through the discussion channels of Write Out Loud - long before it turned into a social network site! With this in mind, I’m painfully aware that most of what I have to say about Simon's work will be considered at best `insignificant' or at its absolute worst - wrong. Wrong in that I am NOT overly familiar with that much literature or indeed, those muddy waters of literary theory. I know about a reader's `Horizon of Expectations' and a little more about formal interpretation, meaning, intention and context. And although meaning is complex and often elusive, I'm relying on a famous article called The Intentional Fallacy to fuel my notions just as to what I think is embodied within the cog-like text of his `Little Machines'.Right, that's enough godwottery. Is it any good?To give myself any chance of reading the book in one sitting, I was determined not to dwell on any particular part for longer than an initial comprehension, even though there is a manageable amount of eighteen poems in total, which includes the novel idea of a cryptic poem toward the end of the publication. This particular poem is self-explanatory…or is it? You see, I'm doing it already. It's difficult to read this book without looking for buried or secreted linguistic clues. The overall theme(s) is/are are not immediately obvious if you're looking away from the familiar topics regarding `death' `regret' `natural cycles’ etcetera. Reading the book without pausing for reflective thought was difficult. But this may be because I suspect that Simon's own words are mined from the depths of poetic theorised thought. It's highly unlikely that any one word is in here purely by chance and that's why, when you stumble across a cocktail stick of a word or clause it makes the act of swallowing that little bit more uncomfortable. After running along some strict syllabillic corridors, I was keen to spend much more time walking through its more open and less formal semantic fields at a more leisurely pace. At a pace where I could choose to sit and pause and pull petals from their stems should I wish? The bark from trees, or simply chew the end of a biro while staring onto blank walls willing my own cognitive cogs to grind into some sort of action. What usually oils my aging, rusting parts is the universal lubricant of poetic imagery. The WD40 of subtle assonance. The stubborn greases of simile and metaphor. The intimacy of KY Jelliwotsit. The multi-purpose `no job too small' application of comprehension oil. As it was, after the first read-through, my cogs felt like the joints of Baum's Tin Man. They needed loobin' - if my understanding wasn't going to come to a grinding, rather embarrassing halt. Like any finely tuned machine - ‘Little Machines’ only starts to perform when it reaches a temperature that promotes optimum performance - or your brain does. Whichever heats up first?Initially, I didn’t get ‘Little Machines’. I didn’t have the time. The seemingly random titled pieces, ranging from ‘The Seduction’ to ‘Cryptic Poem: Heron’ are, I feel, subtle references to the insignificance of an individual’s being. How nature envelops each and every one of us inside man’s concept of time. The consequence and significance of nature acting as a huge force. The unstoppable object colliding with what is evolving into a self-destructing, immovable force.This may be a million miles away from the opinion of Professor Michael Symmons Roberts whose synopsis features on the back of the book. He describes the collection as ‘…at their best these are poems of beauty and tenderness, carried by a distinctive new voice’. Stock adjectives that sit amongst the blurbs on far too many back covers of books dedicated to poetry.Some poems feel like they are heavily influenced by the poetry ‘greats’ - the Modernists, including Ezra Pound, Robert Frost and T.S Eliot, while several more have a sliver of contemporary structure and form. Much of the rhyming schemes are simply A-B-B-A, but it’s not the meticulous attention to detail that ignites the combustion chamber of enjoyable reading. Nor the choice of language - which, on just the odd occasion, can feel just a little too flamboyant, it’s the book’s sense of intimacy. It’s sense of awareness.John G Hall sums the book up perfectly. ‘A fine collection of little machines from one of Manchester’s finest poetry engineers’. Stick your head under Simon Rennie’s bonnet when ‘Little Machines’ is made available from November 26th.

To get a copy from Simon, please send a cheque for £5, made payable to Simon Rennie, to: 28 Old Lees Road, Hebden Bridge, West Yorkshire, HX7 8HW. And it is also possible to buy directly from the publisher; make your cheque payable to Alec Newman, and send to: Knives, Forks
and Spoons, 47 Baron Street, Bury, Lancashire, BL9 0TY.

Well, you know what these sub-editors are like? He's practically changed everything. The more I've read some pieces since - the more I can see. It's like cleaning steam from off the inside of a cold window. And yes, I did enjoy it. In fact, it's been promoted to my bedside table. You've replaced a rather well-thumbed Carol Ann Duffy, if I can say such a thing in today's climate?

Actually, I've just had an email from the Great Glennon claiming responsibility for the title of this piece. But he's a notoriously unreliable character....