Poetry in the landscape: Felicity's lament for ruined castle 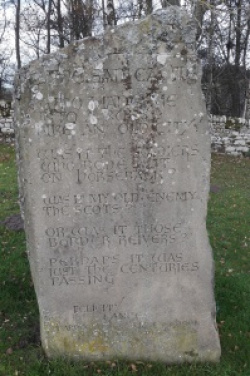 This poem, written by Felicity Lance, at the age of eight in 1997, won a national writing competition for young people that was judged by the poet laureate, Ted Hughes. Felicity’s poem, ‘The Sad Castle’, is about the nearby remains of Harbottle castle, and I stumbled upon it at the start of a walk in the Northumberland hills on Sunday.

Felicity’s poem was carved into this stone next to the castle car park by stonemason David Edwick. Over 20 years it has weathered and is not so easy to read, but this is what it says:

Who made me into a ruin like an old city?

Was it the soldiers who rode out on horseback?

Was it my old enemy the Scots?

Or was it those Border Reivers?

Perhaps it was just the centuries passing.

Felicity was last heard of on Google in 2006, when she was studying for her A-levels and hoping to win a university place to read history. Wherever she is now, I wonder if she still writes any poetry?

Felicity, I'm delighted that you've stumbled upon this story and commented on it. Thank you! Hope you continue to write poetry, if only now and again ...

Sometimes but it’s mainly for myself and not very good.