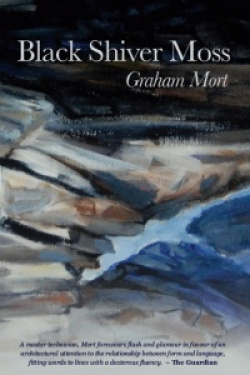 Graham Mort was born in Lancashire and studied English at Liverpool University. After training to be a teacher, he taught in schools, colleges, prisons, special education and psychiatric units before becoming a freelance writer. He gained a doctorate from the University of Glamorgan and is now professor of creative writing and transcultural literature at Lancaster University. He is the author of nine previous collections of poetry, two prize-winning collections of short stories, radio dramas and educational course books.

Reading the poems in Black Shiver Moss it quickly becomes apparent that one is in the hands of a skilled practitioner, someone who has honed and perfected his craft over the years and is comfortable with it. The poems, which are predominantly of a pastoral nature, are full of intricate detail which is sharply observed and beautifully conveyed to the reader. His poems are populated more by animals than humans – by palomino foals, cows, pigs, cock pheasants and rough fell sheep – so that when a human does appear, as in ‘Girl at Cam Fell’ it almost comes as a surprise because of the intensity of the solitude that surrounds his work.

Mort is a poet who is familiar with the dawn. He rises early and captures its serenity in his lines. He is good on atmospherics, one of his strong points is his ability to conjure a landscape within a single line. His vocabulary is wide and he has a penchant for dropping unusual words into a sentence when least expected. In ‘Brambles’ he writes about “swinging a gravid / carrier bag at the gate  where Limousins / thud the field … ”, and later, “[of] wet snow blowing from the yard / to the log pile, the vegetable beds, the pond’s / cataleptic stare.”

The opening lines of ‘Fado’ give another instance of his tantalising use of vocabulary: “I love the sound of Fado: / the way melisma makes old-style / calligraphies of air …”

The themes are familiar ones: a household waking at dawn, holidays abroad, the weather and what it does to landscape, berry-picking, fell-walking, listening to music, changing the clocks, but they are written about in a way that never fails to engage our attention and, crucially, are about more than the landscapes they inhabit.  Many assume a reflective, even philosophical, stance with references to specific points in history.

The tone is not always that of serious wonderment. There is humour here too, as evidenced in the poem ‘Dogs’ where Mort considers the possibilities of dogs with “super-sensile ears” feeling “the aura of a poem coming near”.

The poems are not all confined to one place. There are references to South Africa, in particular, the fynbos of the Western Cape, Spain, Portugal, Italy and France as well as, closer to home, the “debatable lands” of Cumbria, the fells of the Lake District and the high moors of the north of England. Mort’s interest in Africa in a number of his poems ties in with his academic research on emergent African writing, the training of African writers and the promotion of their work.

In this collection Mort, with his startling exactitude and shrewd observation, leaves us “spellbound in stanzas”. Highly recommended.

◄ 'A Room Alone' by A.M.Clarke is Write Out Loud's Poem of the Week