Before you read the poem... a few more to open in New Tabs!!!

Freedoms cries brought the statues down
The Reich lay in ruins as a new regime
Promised freedom of a version of the west or east
Better than what before had been.
Yet some still were kept behind bars
Whose lifestyle the world still disapproved
The uniforms changed but little else
So to those of the Pink Triangle time proved.
The Stars and Stripes and the Southern Cross
Flew where the Swastika has flown before
As blacks at home knew little else
And hoped for little more.
The Western Dream, the Eastern struggle
Like David and Goliath to battle set
On Cuban shores Arameggdon set the scene
As the world looked on with baited breath.
Goliath in the battle stood aside
Capitaism put on her skimpies robes
Goliath was soon eating from her hand
Seduced by the money and the light strobes.
But everything free comes at a cost
She who gives must be paid
Known by all men who the bordello visit
Who with the seductress have laid.
To pay her demands they taxes their own
Produce more and live on less
We must pay Capitalism’s due as is the way of the world
We must pay the seductress Miss West.
The stautes of Hitler town down
Were replaced with those of the new regime who must
But up new Gods in a land of no Gods
To believe in or to trust. 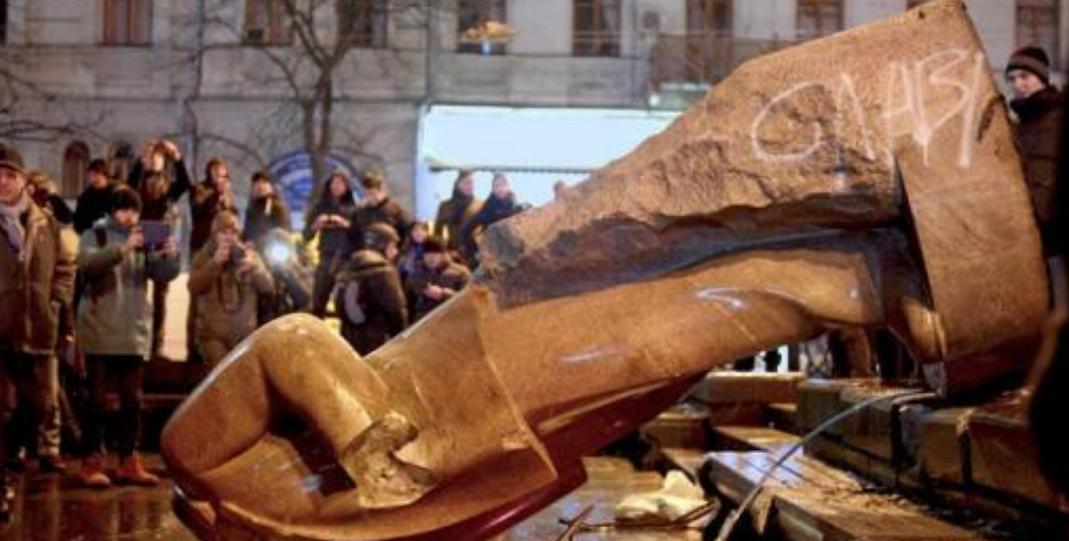 Freedoms cries brought the statues down
For all the world to see
Capitalism and the stars and stripes
Still stood those of General Lee
The families in the tower blocks
Who queued for food not there
Thought of a better tomorrow
When there was money to spare.
Confederate flags and the stars and stripes
Both screamed America
To a world which saw the two levels of freedom
Shrugged its shoulders with a mere “yeah”
The free folk fled in their droves
To lands where they could earn more
Town and counties emptied of youth
That were teeming before
Rap music to a sullen youth played
The world danced along to the tune
The stars and stripes and the Saltire flew
Under the all seeing Moon.

Statue of Saddam Hussein is torn down in Iraq

Freedoms cries brought the statues down
Live, all all the world saw
A wold destroyed to build it up
In a campaign of shock and awe
The fools cry like a torn cloth
Tore through the middle East
Proved itself worse than what was before
Like some mythological beast.
The stars and stripes and confederate flags
Were on the sides of Jeeps
The sullen youth more vocal now
Stand up, as violence steadily creeps.

Freedoms cried brought the statues down
As folk stand idly by no more
The Confederate flag is shown for what it is
As some aim to return to the America of before.
In the east of Europe the widow queues
Among full shelves with empty pockets
Steals what she needs to last the week
As the nation spends money on hosting rockets.
The smoke is still to settle on the Middle East
Korea’s rockets are pointing West
The statues coming down are America’s
Who has failed justice’s test.

Confederate soldier statue torn down in Durham North Carolina in 2017

What it demanded for others denied to its own
Is not by its own demanded
They will fight for their rights against the right
To the fight wont come empty handed.
But first they will march peaceful
Take the attacks from lunatics with cars
Stand for the freedoms denied by the Southern Cross
Stand for their rights under the Stripes and the Stars!
The statues of all tyrants will come down
History and time have shown
“Look on my works and despair” Ozymandias said…
We tear down the Ozymandias among our own!