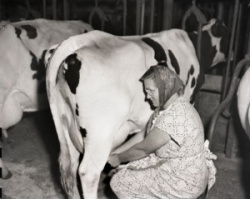 The Write Out Loud Poem of the Week is ‘The Farmer’s Wife’ by Cynthia Buell Thomas, a poem that is based on memories “about my mother’s people who were simple country farmers in eastern Ontario …  I understood the hardship of such a life for my grandparents; maybe especially my grandmother, but I could also see the magic.” It is the second time that Cynthia has won Poem of the Week. Here are her replies to a new set of questions:

I first began to love poetry with the nursery rhymes, mostly those from the “old country” as many Canadians called England, Scotland and Ireland. The rhymes were snappy and funny, tripping off the tongue effortlessly. And then in Sunday school, from ages 4-10, singing Hymns Especially for Children. The books were in verse only, and I soon realised I could read the “poems” with great delight: the words alone were “full of music”. At age 10 I became part of the senior choir and sang from the adult hymn books. In them I found the same thrill of poetry but with more sophisticated ideas, and intricate melody. For me, regardless of form, poetry must have “music” as a fundamental force, pulsing from the diction chosen to express the writer's ideas.

Can you remember the first poem that you wrote, how old were you, what spurred you to write it?

I was dabbling by age 6, but I have one from age 8 that still astounds me, one about the stars that I would not be ashamed of today. It gives me goose bumps.

If you could only have one poet’s work to read which one would you choose and why?

I have so many beloved poets. As a teenager, 'In Time of the “Breaking of Nations” ' by Thomas Hardy smote me; Browning and Yeats; and May Sarton. Too, too many from so many eras, including Write Out Loud these past few years. I could not choose.

What was the inspiration for this week’s Poem of the Week?

The inspiration for 'The Farmer's Wife' was the word “trug” which opened a flood of memories about my mother's people who were simple country farmers in eastern Ontario, with a very small holding. I understood the hardship of such a life for my grandparents; maybe especially my grandmother, but I could also see the magic. I knew even then that I was privileged. My grandfather died shortly after electricity arrived, and my grandmother became a listless, unhappy woman for several years before her death. She was well cared for by the family, but I think the change was too great for her personal happiness. She was no longer “in charge of running a business” and she had nothing important to do. I think she just wanted to die, and she did.

Do you perform your work and if so, what advice would you give to other poets just starting out?

I “read/perform” in Sale, Greater Manchester, and also with Word Central in Manchester City Library.  For new “performers”, I encourage you to practise at home until the words of your own work feel comfortable in your own mouth; then, on the occasion, stand tall, read clearly and speak up, and out. It will work wonders for engaging your listeners who want to hear every word.

What would be your desert island luxury?

On a desert island, I would like to have a heavy crystal goblet, presuming there would be fresh water to drink. I would love dipping and sipping from fine glass; it would keep me connected to civilisation. Besides, it might build me fire, too.

The small barn is dim, stuffy with rotting wood

the smell of summer hay, urine and fresh excrement

The building rustles with little movements

in the rafters, the old plank walls

restive animals cropping in their troughs.

sit and mewl, and they wait

strategically short of an irritated hoof.

The woman settles securely on the three-legged stool.

She heaves her heavy skirts up and aside

baring her ankle boots, her knees, almost her thighs

quickly glancing left and right, and behind

Expertly she wedges the heavy trug between her knees

and strokes the cow's golden flank.

A mantra sibilant, restful and intimate.

its udder swollen, eager for the woman's fingers on its teats.

She begins to caress, pull and press over the wooden pail.

She milks the cow rhythmically, sympathetically

She savours the smell of the thick warm milk, the cow's pulsing hide

the pungency of the close barn.

She likes the scent of herself released from thick clothes.

She breathes deeply and speaks softly,

I once wrote this:

Yours is a great poem. Congratulations!

You get from me, Cynthia, congratulations but no surprise. You are a superb poet, wonderful reader-out-loud of your work and a generous supporter of others. A worthy winner this, with such superb images and appeals to the olfactory and the tactile senses. Wow!

my local Poems and Pints was cancelled last night so I spent the evening reading lots of excellent writing here on WoL -
such a high standard of quality and varied styles that we are fortunate to have for our reading enjoyment. I was planning on heading over to your farmyard when sleep got the better of me.

so it's good morning and congrats from me on POTW.

lovely cynthia, nothing short of the immense quality i would expect from such a fine poetic mind. any chance of hearing this when we return to sale in august?

without doubt a worthy recipient.

I love the authenticity of this poem, it has the ring of truth and is so full of life in its most fundamental sense. A really skilled picture painting and I agree your finest input in my book. I love the contrast between the smells and we are lured in by the sensory experience. I think of Thomas Hardy and the old farm wagons of those days.

Many many congratulations on a well deserved potw. I can smell the odours from the animals as I read this poem.
It is interesting your use of the word true. Where I come from in Sussex trugs are a type of wooden basket which seemed to have been made locally. I can remember my grandmother using one for weeding in her garden.
Tyre is a wonderful rich description here. Fabulous

I agree with Graham about this being your finest creation.

You have managed to get all those Tactile, auditory and odorous qualities that connect us to the physically animal
world that we live in....even the sex...(these days to get
`heaves` `skirts up and aside` and `thigh` into a poem and control it from running erotically`amok` is quite a feat.

Humanity is out of sight the huge intellectual superior...But this makes me glad that my Christianity gets me away from that Homeric shady stuff, and insists on the resurrection
of the body.

Great picture. Grandma had Holsteins too, but my favourite cows were the Jerseys with their rich, golden coats and their rich golden milk, most of which went 'for sale' for money to run the farm; or straight into the barn cats from teat to mouth in a high white arch. My grandma was very expert, and so were the cats. I used to fall over myself laughing.

Maybe that's how I fell into the gutter one evening, when it was full of poo and piss freshly passed. Now THAT was a memory!

Well done Cynthia. This gripped me from start to finish. It was a gem from your collection.

If anyone else is old enough to remember those short filler films that used to be used to bridge television programmes (I think one was known as the potter's wheel) in the earlier days of broadcasting, then this poem instantly reminds me of such as those.

In each short episode someone demonstrated with effortless ability their particular skill.

This poem does the same, the noises, the smell, the time, the location and best of all the person executing the skill.

Cynthia I have read your work here on WOL for many years and for me this is easily your finest work to date.

An easy POTW for me! Very well done!

Congratulations on your POTW Cynthia. I absolutely loved this one the first time I read it, and it gets better with every read.
I've also read your replies to the questions. in particular the one about performing. this is a weak point of mine so I'll take your advice on board.