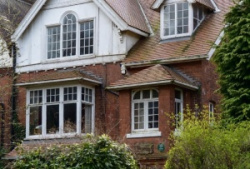 The flat in Hull that inspired the title of Philip Larkin’s poem ‘ High Windows’  - where he lived for 18 years – has been given Grade II listed building status. Larkin lived in an attic flat at 32 Pearson Park, overlooking the park. His final collection of poems was also titled High Windows.

The listing of Larkin’s flat comes alongside the granting of heritage status to eight other Hull landmarks, including the Humber bridge, the Tidal Surge Barrier, and some Edwardian-style toilets, to mark Hull’s year as City of Culture.

Larkin lived at Pearson Park during his time as Hull University’s librarian. The property was owned by the university. It is number 14 on the Philip Larkin trail.

Larkin said of the flat: “It was the top flat of a house that was reputedly the American Consulate during the war, and though it might not have suited everybody, it suited me.”  Much of the footage for the BBC’s Monitor programme, in which John Betjeman interviewed Larkin, was filmed at Pearson Park. He reluctantly moved only when the university decided to sell the entire house in 1974.

An exhibition that recently opened in Hull’s Brynmor Jones library, where Larkin was librarian, has gathered together hundreds of personal items from Larkin’s life, including his book collection, clothes, ornaments from his office and home, unseen photographs, notes and doodles. Most of the objects were originally in Larkin’s home and have never been seen in public before.