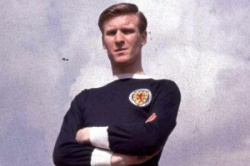 An anthology of football poetry featuring more than 100 poems in aid of Alzheimer Scotland’s Football Memories project has been launched at the Scottish Football Museum at Hampden Park.

There are more than 150 Football Memories groups in Scotland, many of them attached to individual football clubs. Supporters include Sir Alex Ferguson and the Professional Footballers Association Scotland.

Jim said: “The book has its roots in my role as poet-in-residence at St Johnstone, when I was invited to write a piece and deliver it at the club’s Hall of Fame dinner at Perth Concert Hall, weaving in the stories of the club legends being honoured.”

Lifelong St Johnstone fan Stewart Walker suggested Jim might like to work on poems which would generate talking points and take fans back down memory lane. “I naively said that would mean a lot of poems. But it really hit home when Stewart said it wouldn’t really matter if I repeated the same poem every few weeks.

“I had been impressed with the project and wanted to do more to support the national ‘Football Memories’ programme so I suggested trying to pull together a book of poetry. I put a shout out to contemporaries across Scotland and was bowled over by their response. We have amassed more than 100 poems by around 50 poets, men and women of all ages, for the anthology.

“The notional theme was about football memories and the ‘good old days’ at their clubs. We have poems about Willie Bauld, Alan Gilzean, Jim Baxter, Davie Cooper, Denis Law and many more besides.

“And, particularly poignant given his condition in the 50th anniversary year of Celtic’s European Cup win, there are a couple paying tribute to Lisbon Lions’ captain Billy McNeill, pictured, which had been contributed before the family went public. We are keen to raise awareness of Football Memories and dementia, which touches the lives of everyone.”

Jim hopes to join contributors promoting the anthology at book festivals ranging from the Borders to the Highlands in the months ahead. Ally Palmer of Nutmeg football magazine has helped Jim in putting the anthology together, and you can order copies of Mind the Time here

Love your poem, John. Never realised Colin Waldron -
a name I'd forgotten - played for United as well as Chelsea. Thanks for the FB heads-up that led me submitting some poems to this wonderful anthology, including one about my mother-in-law's lifelong love for Ross County. Just received my copy in the post today - it's beautifully produced, and I'm very, very proud to be in it. Just hope my mother-in-law likes the poem!

I have a poem in this anthology, great cause