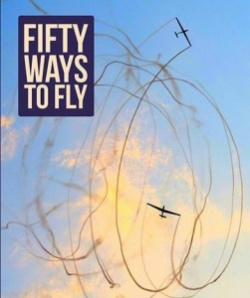 Most if not all of us have had that dream of flying occasionally – of looking down on the world from above. On Wednesday night a poetry anthology that tries imaginatively to capture the many aspects of that sensation, taking in butterflies, Concorde, the Wright brothers, Icarus, and the land of the dinosaurs, was launched.

Fifty Ways to Fly is the brainchild of poet and editor Alison Hill, who is still on her own flying journey. Her journey took off when she published Sisters in Spitfires in 2015, a poetry collection that celebrated the lives of the women who flew planes with the Air Transport Auxiliary (ATA) during the second world war. Since then she has read at the Amy Johnson festival in Hull in the company of poets such as Ian Duhig, whose own poem, ‘The Last Testament of Amy Johnson,’ is included in this collection.

There are also poems from two wartime flyers, Pauline Gower and Jackie Moggridge, at the end of the anthology, which is being sold in support of the British Women Pilots’ Association, founded in 1955 by former women members of the ATA.

Wednesday night’s reading was launched with the anthology’s title poem by Maggie Sawkins, read by Judith Watts. Its list (don’t try some of these at home) includes: “Launch yourself from Ben Nevis …  Come back as a hawk … Take a tab of LSD … Akimbo on a magic broomstick”. Jenny Messer’s ‘Fifty Ways to Fly II’ referenced Cape Canaveral, EM Forster, and Wim Wenders. ‘Jet’ by Derek Adams captured the “grey roar” of a training plane in the Scottish Highlands, and the way it “unzips air”, while Annie Taylor looked back wistfully to the glory days of Concorde, that supersonic “aristocrat of the aerial Appian Way”. She said: “I used to watch it going over Chiswick at about six in the evening, as I was collecting my daughter from her dancing lessons.”

The reading order was announced via paper planes that zipped about the upstairs room at The Railway pub in Teddington, bearing the names of poets. It was another measure of the warmth of the evening that Annie Taylor and Frances White also read poems in the anthology by departed members of their poetry group - the late Beryl Myers, and Aeronwy Thomas, daughter of Dylan Thomas.

Isabel Bermudez’s ‘The Butterfly House’, set in Colombia, opens with rich imagery that descends into darkness, as she imagines the butterflies as “sheaves of propaganda leaflets from army helicopters, corpses in the river or by the road, young girls … with bullets in their skulls”.  Michael Bartholomew- Biggs’s ‘Learning to Fly’ was part of a sequence, and in the spirit of Henry Reed’s ‘Naming of Parts’. Dino Mahoney involved a dreamlike mood in ‘Up’:  “You have to be thinking of / something else, / or nothing at all, / to rise and fly.”

Alison Hill read a poem by her mother, Patricia Hill, called ‘Looping the Loop’, and one of her own from her Spitfires collection, ‘Remembering Jackie’. She followed that with the last two poems in the collection. ‘Ten Little Aeroplanes’ by Pauline Gower, founder of the women’s section of the ATA,  was taken from her collection Piffling Poems for Pilots;  ‘The Last Flight’ was by Jackie Moggridge, who was apparently always writing poems, and after her war service became the first female airline captain. ‘The Last Flight’ – “which bearing is the best all through the night / to reach the great unknown?” – was found only recently by her daughter in an attic.

And that wasn’t all. In the spirit of Rhythm & Muse, the popular poetry and music night that Alison ran for a number for years, the evening ended with two music acts, both performing lyrics that appear in the anthology. First was singer-songwriter James Burton with ‘Sisters of the ATA’, to be followed by Dudley Tyrrell and Stephanie Sara – the Flying Blueberries – with ‘Wave From Paradise’.

It was a night when another event earlier in the day, only a short train ride away, was never far from our minds – but it was a night too to nevertheless enjoy the communality of poetry, and to celebrate the wartime heroics of women pilots. It’s right to remember them, and the freedoms they sought and stood for.

◄ 'Five daughters in the slant light on the porch'

morning MC - there are indeed some remarkable stories still left to be told but the gaining of access to private archives is not always straightforward. Even within families there sometimes exists a peculiar reticence to share documents and photographs.

In the case of the de Havilland connection it was frustrating as I have barely any photos of that generation of Hills and Thomas's (apart from the one mentioned in the book and one or two yet to be identified). But there must have been plenty taken at the time. Louise's sister Gladys was a witness at the wedding and another sister Lottie was housekeeper for them for most of their lives. I have often wondered about the interactions between these two very different families - were they awkward or accepting of each other's social backgrounds? How was Louise accepted by the de Havillands? It had all the elements of a classic crossing of the classes love story.

Like Isabella Bird's relationship with Jim Nugent, it's the sub-plots that so often make social history so fascinating. I feel drawn to Louise Thomas / de Havilland's story for those reasons and hopefully one day will revisit her and Sir Geoffers to dig a little deeper.

Colin - I can tell you that IB's "A Lady's Life in the Rocky Mountains" provided the primary source for my script...
her extraordinary relationship with the scarred and feared
former scout/trapper "Mountain Jim" Nugent, the self-
appointed guardian of the idyllic Estes Park, a forerunner of the "dude ranch", where Isabella stayed while she
explored (with Jim, but mainly solo on horseback) the
surrounding Colorado country and its mountains.
Your deHavilland family connection is made of the same
extraordinary stuff - with a similar centrepiece of a
woman of fortitude and courage. You have every right
to tell of her and her own life's progress in times when
such things were rarely reported - or, if they were, kept
within the immediate circle of family, friends and relations. She would warrant a chapter in any volume
devoted to "Tales of Remarkable Women".

MC - I read your comment with interest having not long ago read Adventures in the Rocky Mountains by IB, the extracts version published as part of Penguin's Great Journeys series. What an amazing woman she was and a decent travel writer too. I'd love to read your screenplay.

This article brings to mind my great aunt Louise Thomas - sister in law to my great grandfather Alfred William Hill who I recently wrote about here on WoL. Her father worked as a railway tunnel miner as well and both the Hill and Thomas families lived in quite appalling shanty towns wherever the work took them up and down the country.

At the age of 2 in 1881 the Thomas family had moved to Portskewett in Monmouthshire next to the Severn Rail Tunnel workings. By 1901 she was in Newport working as a Board School Teacher. I reckon she must have seen an ad for a post as governess with the de Havilland family. After she started working for them she became friends with the younger children's older brother Geoffrey and they married in 1909.

As you probably know, Geoffrey became one of our earliest aviation pioneers and later founded the de Havilland aircraft company. In his autobiography 'Sky Fever' there is a charming photo of 'Louie' stitching the covering for his first aeroplane using a treadle Singer sewing machine. She must have shared a number of early flights with him as one is mentioned in the book when she and their 8 week old son were taken up. I have also unearthed possible stories of them flying to Wales to visit her Mother but I have not been able to verify this but it seems highly plausible.

She became Lady Louie when Geoffrey was knighted in 1944. They had 3 sons of which 2 died in plane crashes within 3 years of each other, one over the Thames Estuary on a test flight. It is said that she never recovered from these tragedies and passed away in 1949.

I made contact with her grand daughter a couple of years back but she claimed there were no family photos. I suspect this was not the case, but in fairness she had just given birth so maybe it was not the best time. I would love to write up her story one day as it is quite remarkable - from shanty navvy life to high flying Lady. I'm not aware of her being a writer though.

Women forging their own path through life are nothing new.
I once wrote a screenplay of a journey by extraordinary writer/traveller and philanthropist from the latter half of
the 19th century UK: Isabella Lucy Bird - who thought
nothing of solo adventures in unexplored and uncertain
parts of the world. recording her experiences to become
something of an achieving celebrity irrespective of her sex.
In "pensionable age" she was on horseback exploring the
Atlas Mountains of Morocco...a woman far ahead of her own time and unhindered by its restrictions. Doubtless
there are others less well known who surmounted their
own personal obstacles in life beyond the social mores
and expectations of their time.