Having the last laugh: comics beat poets in festival bout of Stand Up and Slam! 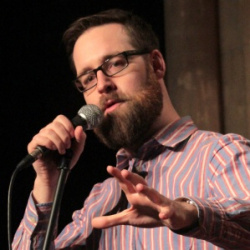 “It’s like, it’s like, I don’t know what it’s like, I’m not allowed to use similes any more,” lamented team captain Dan Simpson, pictured, on a night when his band of poets lost 2-3 to a team of comics in Stand Up and Slam!, the up and at ’em show that kicked off the Landmark Stories festival of storytelling, poetry and comedy in Teddington, south-west London on Thursday night.

The score was down to audience voting, monitored with scrupulous fairness by a judge who had gamely sat in the almost-deserted front row – all the other rows were packed – and had been selected as officiator by comedy team captain Tom Houghton, who sweet-talked her at regular intervals for the rest of the evening. (Write Out Loud is not suggesting that this in any way had an effect on her judging). 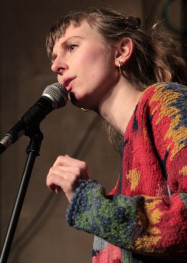 Poetry captain Simpson was supported by Paul Cree, from the outer London suburb of Morden, whose main claim to fame is its station at the end of the Northern Line tube - or rather, as Cree insisted, the beginning. His haiku about the Northern Line received an odd, deathly silence from the otherwise supportive audience, his hapless look reminiscent a little of Michael Crawford’s Frank Spencer. The other member of the poetry team was Madi Maxwell-Libby, pictured, whose no-holds-barred verses included a warning to the big money men to keep their hands off her “lady garden”, and a poem about a porn website. A quick check of her CV reveals that she has also played a part in the Nationwide poetry ads campaign.

For the comics, Tom Houghton was aided by Matt Green and Archie Maddocks. In the themed section of the contest, Green bemoaned the rudeness of those who check their emails while conversing with others and quite rightly wondered, in the years before smartphones, what would the reaction have been if you had brought a stack of letters and junk mail to the pub. 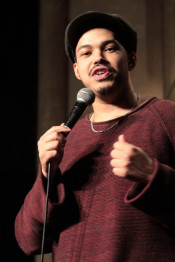 Maddocks, pictured left, who wanted to know why there were no black ghosts, was awed by the surrounding of the Landmark Arts Centre, which occupies an enormous, deconsecrated church. His routines, including ones about corpses in the mortuary and an unhelpful zookeeper, invariably included the odd physical blow or two before he got to the, er, punchline.

Maybe it was Houghton’s love poem to the judge that swung it with the audience. Maybe it was Green’s skilful poem about studying poetry. At any rate, the comics showed they could mix it with the poets. It was left to Simpson at the end to admit defeat and formally renounce his own art form, as the similes finally eluded him.

“I’ve never been to a slam before,” said one audience member on arrival on Thursday night. This wasn’t exactly a slam, apart from the rounds and the audience voting. But Stand Up and Slam! adds its own entertaining ingredients to the mix and has been a big hit in places like Edinburgh, Camden and Brighton. You can now add Teddington to that list, too.

In a reshuffle of festival events, Friday night's Zena Edwards/Francesca Beard show will no longer take place. Zena and Francesca will be appearing  with Luke Wright on Saturday night, and Friday night tickets will be valid for Saturday's show