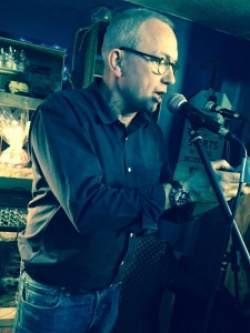 Northern Beat Poetry?  Is that, like, a THING?  You better believe it, Post-Truthers.  The cultural descendants of Ginsberg, Kerouac and Herman’s Hermits emerge from the cultural swamp that Mr Trump’s busy draining to bring the ripening fruit of invention to the vitamin-deficient streets of the North.

Who cares about courgette shortages?  It’s not like Greggs is closing.

On Wednesday 1st March, Northern Beat Poetry, formerly a skulking presence on grimy, stereotyped cobbles, decided to stop hiding its face under the brim of a flat cap to emerge blinking like a released pit pony into the harsh sunlight of sellout and self-promotion.  In other words, Jimmy Andrex has released a new album.

A new collection of poems set to minimalist electronica, Northern Beat Poetry bills itself as Brexit Blues in Beats and Broken English, a poetic response to 2016.  And it never mentions dead pop stars once, for Northern Beat Poets have bigger fish to fry.  With scraps on.