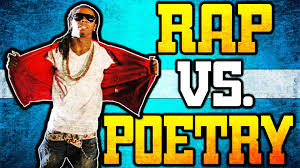 Rap: talks about drugs, girls, life, clubbing, killing, or dissing. Today if you ask anyone the names they know in the rap world, they will either name, names like: Eminem, Dr.Dre, Flo-ri-da, Lil Wayne, P.Diddy, and etc. Before an artist writes down their rap on paper, they pick a topic to rap about. Rapping is more vulgar, anger, and it has more accents to it.

Either way... To me, Poetry is superior to rap because poetry basically created rap! I hope nobody feels offended by this topic, I'm just stating facts. I want people to know that poetry can deliver a powerful message just like rap music... But poetry has a way to connect to people better than rap music (where rap music connects to people to violence, sex, money, and reputation.)

This piece seems more fitting for the discussion forum section of this website. You posted this in the poetry blog section but it is not really a poem.

Moreover, I think that this piece is a little narrow minded. Yes, mainstream rap is infamous for promoting sexual vulgarity and violence.

However, there are many rappers that share their Christian world view through their craft. That means their lyrics are positive, free from vulgarity and promotion for drug abuse and violence. I could actually name more than a few and I shall below in the following format-

There are many more that I don't know their label or they might just be independent. Other include: Benjah, Aha Gazelle, Kaleb Mitchell, WxNDER Y, KJ-52, ect, ect...

That's a lot of rappers right there and if you look up some of them you will realize that there are many people tuning into their music because it is uplifting and still ''dope'' rap music.

I don't think that Poetry should be versus Rap. I get that you like poetry better and that's cool. I think Rap utilizes poetry as the lyrics over a great beat...the same way that rhetoric uses poetry when a poem is performed as spoken word.

Well, that was my two cents.