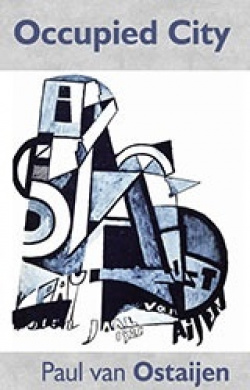 Reading this book, I feel like I’m transported to another world. Not just the world of occupied Antwerp during the first world war; but also the world of Berlin Dada, a heady mixture of political cabaret and avant garde art, music and poetry which is the spiritual home of this visceral, fractured, often visually composed poem sequence. It makes me wonder if the techniques of poetry have actually advanced much since 1921, when this book was first published in Flemish; this is the first English translation of one of the key works of Dadaist literature.

Because of its visual nature, it’s almost impossible to quote from many of its pages. Lines are printed diagonally, typography is enlarged or reduced, some is even circular. It reflects the confusion and business of an occupied city, and often collages advertising hoardings, music hall and opera songs and other ephemera into the poem and its effect on this reader is a kind of word-blizzard that is deliberately meant to confuse and bedazzle. Nevertheless, here is a section from a less visual page:

around the city people everywhere

tell me the songs and I will tell you

you are leaving the city or     won

The intrusion of German into the poem gives a very aural sense of invasion – this is very obviously military language – and the insults (“missing-link faces”, “Pomeranian oafs”) are the reaction of the inhabitants. But it also gives an energy to the poetry that drives it on, and the comparatively softer lines of the first half contrast with the harsh language of the second half to give a very disconnected feel to the whole page. Other languages occur throughout the book: French and English especially, often as quotes or collaged phrases.

Some of the pages, in fact, seem like explosions across the page: in the poem ‘Hollow Harbour’, the port area with its shipping companies and mixture of languages visually explode over the page. The book’s use of collage and often violent juxtaposition of language and syntax give throughout a feeling of dislocation and confusion, but they also build up a picture of a real place during a real war. This is not a sanitised, perfectly metrical and prettified war poem. Even Wilfred Owen seems restrained beside this shellburst of text.

The poems take in all the life of the city, from the music halls and opera houses to the prostitutes to the military paraphernalia of occupation, finishing with the withdrawal of troops from the city. It’s a brilliant evocation of the occupation of a city during a devastating war, and I think Smokestack are to be congratulated for bringing it out.