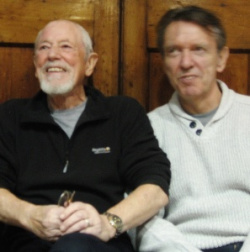 A former teacher and his ex-pupil who were reunited after a gap of 40 years have collaborated to produce a prize-winning collection of poetry. Gap Year, by Andy Blackford, pictured right, and John Foggin, has won the SPM (Sentinel) Publications 2016 poetry book competition, and will be published later this year. Judge Roger Elkin said: “This is a candid and honest poetic partnership. Its fruits are of the highest order.”

John Foggin has won a number of poetry competitions, and his own latest collection, Much Possessed, was published by Smith / Doorstop last year. In his blog John said: “I taught Andy Blackford when he was a super-smart sixth former in Middlesbrough, round about 1968. He was not only clever and subversive, but good company, and funny. He was also, even then, a pretty good guitarist … he almost, but not quite, persuaded me to feel enthusiastic about Cream. He went to Oxford to do PPE, subsequently toured for three years, supporting Genesis in his band Spreadeagle, and, in about 1973 I met him again in a hotel in Gateshead, on his way to Amsterdam to start (I think) a job in the music industry.

“That was it until, after a gap of 40 years, thanks to the wonder that is Facebook, we met again. In May 2013, I went up to Staithes where he has a holiday home, and spent a day with him and his wife, Sandra. Forty years simply melted away. Nothing had changed and everything had changed, and all was well.

“In December (2013) he emailed me to say that the film director Louis Bunuel had been in the habit of meeting a fellow artist each Monday to exchange and critique a new work of art. He proposed that, via the magic of email we would do the same. We would exchange new poems every week for one year. It would become Gap Year.

“We enjoyed ourselves, and there it stood, more or less, despite abortive attempts to ‘market the product’ (Andy used to work at Saatchi’s). And then, out of the blue, earlier this year Andy asked me if we might submit a selection of our stuff for the Sentinel pamphlet competition. I thought it would be nice, and Andy would get some of his work ‘out there’  … he’s had a lot of books of all shapes and sizes published, but never any poetry.

“Remarkably, our mini-collection (called Gap Year, natch) led to our being asked to submit a full collection, which joined a shortlist of six, and subsequently won first prize, and will be published some time in 2017. One of the great things about being a teacher is watching the successes of your pupils, who so often go on to outstrip yours, whatever they might be. But to share that success, and know that none of it would have happened without Andy’s enthusiasm and enterprise, is beyond special.”

A previous success in verse for Andy in a career that has spanned music, advertising and publishing children’s stories and books on a number of other subjects was writing the Um Bongo advert, which includes the lines: “Um Bongo, Um Bongo, they drink it in the Congo.”

He said: “John was my English literature teacher in the sixth form at Middlesbrough Boys’ High. He was an inspiration – young, energetic, enthusiastic to the point of mania. Gerard Manley Hopkins and Joyce came alive under his spell.

“For some nonsensical reason, I read PPE instead of English at Oxford, but it didn’t make a lot of difference because my band Spreadeagle had won a recording contract by finals time and we went straight from college onto the road as support act to Lindisfarne, Genesis and Slade amongst other name acts.

“After years of very limited success, I got a job as a writer on a teen music magazine called Music Star, contributing poignant masterpieces like ‘The Day That Mrs Osmond Cried’. I became the editor of Skateboard Scene, under the pseudonym of Bengt Maelstrom. Thence to advertising, from the golden trap of which I didn’t escape for decades. I worked for Leo Burnet, Grey and Saatchi as a writer and latterly creative director. I’m probably best-known for Um Bongo, which I named and immortalised in verse (it will haunt me to the grave, I’m afraid), and the Nat West Piggies. Getting the ENO chorus to perform Pigaro! was one of life’s stand-out moments.

“I won the Scholastic/Independent children’s story competition with a story I wrote to celebrate the birth of my daughter Verona. There followed about 20 kids’ books, punctuated by books on scuba diving, ultra-marathon running (two favourite hobbies), the Animals, the Northern Soul explosion, skateboarding and other random topics. I’ve always written some verse but I didn’t really gain the necessary confidence to pursue it until I met up with John again after 43 years. We’ve just commenced work on Gap Year 2 – a poem a week each for the whole of 2017.”

Humber reflections: Sean O'Brien on how city of culture has inspired poets ►