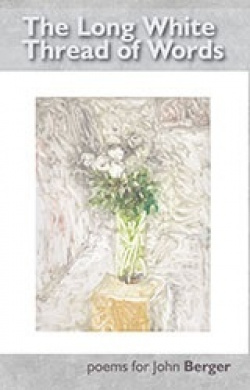 I’ll confess to having known very little about John Berger, apart from distant memories of his groundbreaking TV series on art, Ways of Seeing. This anthology of tributes to the art critic, essayist, novelist and poet, therefore, published just a few months before his recent death, reveals something of what I was missing. He was resolutely an internationalist, but also rooted in one area: the small French village of Quincy, where he moved to escape from London.

In what amounts to a kind of festschrift for his 90th birthday, poets from across the world  contributed a poem each to celebrate his achievements. And what a variety of forms and writing styles he inspired! Many of the more interesting come from poets I’ve never heard of before, including the editor Gareth Evans, whose ‘In Secret’ responds to photography through oblique descriptive statements that convey feeling rather than mere verisimilitude:

the knot of a face

the dog on three legs trying to scent the way in

the wind between the blocks

one or two thin trees

the guilt in the eyes and the joy

in the laced fingers

The anthology includes fine poems by poets as well-known as Andrew Motion and John Burnside, but I’ll freely admit that I love finding good poets I’ve never heard of from around the world. Poetry is an international language that communicates through sound and image, and I think Berger would have been very pleased to see how far his writings have travelled. I love, for instance, the narrative prose poems of Mukoma Wa Ngugi’s ‘Portraits of My Grandfather’, again taken from photographs, this time set in Africa. Or Michael Rosen’s evocations of growing up in a Communist household.

History, place, and the survival of goodness are often the themes of these poems. A poem like Jura  Soyfer’s ‘Matuska Speaks’ evokes the madness of Nazism through the voice of a serial killer:

One they call a criminal,

The other without demur

They promote to general.

Of the two, who’s more gaga,

The world or old Matuska?

As a tribute to a thinker and writer of world renown, this is a lovely book. It’s also full of great poems. If it gets people to look more deeply into the work of John Berger, then it’s done its job; but it’s also a great anthology of world poetry.