'The foxes are bouncing, the baby awakes': McGonagall's Christmas message 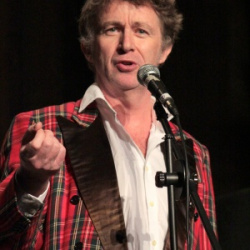 Stand-up poet Elvis McGonagall has sent out his own Christmas message to followers in the form of a festive poem – and explained it thus:

“Noddy Holder screaming ‘It's Christmas!’ for me is just the soundtrack to Edvard Munch's otherwise silent scream. Nevertheless you've got to try to enter into the spirit of things, haven't you? So here¹s a wee Christmas gift in the shape of a poem for you, gift wrapped by elves at the Graceland caravan park, chosen with as much thought as that selection box for your auntie from the garage forecourt shop, quite possibly as disappointing as a poor joke in a cheap cracker, hastily written whilst trying to feel Christmassy in front of the telly, with particular reference to this year's St John of the Holy Lewis ad but then watching the News at Ten. See if you can spot the join."

Away in a manger, no crib for a bed

Someone's erected a trampoline instead

The foxes are bouncing, the baby awakes

‘Eighty miles on a donkey and me up the duff

No room at the Premier Inn, I¹m not chuffed

Where's the Wise Men with frankincense, myrrh and gold

The angels, the shepherds, the lo and behold?’

‘Who gives a toss about a gymnastic dog

A badger that goes boing! or an airborne hedgehog?

I was promised some glory, the birth of a King

At the least I want to hear Aled Jones sing

‘But while we're shopping bombs are dropping, I've lost all mirth

Aleppo¹s burning the meaning and truth from this birth

So goodwill to all men for what it is worth

And let's pray like fuck for some Peace on this Earth’

◄ 'That apple bride was sweet, and I want to bring it back to him'

The medium's his message: how David Turner gets podcast poets to relax and chat ►