The medium's his message: how David Turner gets podcast poets to relax and chat 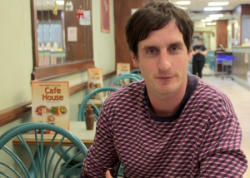 It might seem odd to some, one interviewer interrogating another, but David Turner was far too polite to comment on my old-tech approach of turning up with a list of questions on a clipboard, and then scribbling down the answers in a sub-shorthand, semi-legible scrawl. (It’s why I prefer to interview by email).

He had suggested the venue, a cafe near Elephant & Castle in south London. Turner’s own technique is to record conversations, rather than conduct interviews, and then to put them out on the internet as part of his Lunar Poetry Podcasts series.

Since October 2014 he has been chatting with poets, spoken word artists and writers such as John Hegley, Helen Mort, Melissa Lee-Houghton, Hannah Silva, Paula Varjack, Jemima Foxtrot, Kayo Chingonyi, and Keith Jarrett, looking at subjects such as accessibility in the arts and poetry in schools, investigating the poetry scene in places like Bristol and Torquay, and finding out more about poetry institutions such as Niall O’Sullivan’s Poetry Unplugged and Bang Said The Gun. For much of that time he has also been running a monthly open mic night called Silence Found A Tongue.

Lunar Poetry Podcasts began as an audio accompaniment to Lunar Poetry magazine, edited by Paul McMenemy. It is now an independent project while keeping the Lunar name. A £13,000 Arts Council grant has enabled a move to Soundcloud and iTunes, making it more accessible and easier to download, with the grant also ensuring that all content remains free to download until September 2017.

Turner says his aim is to “give poets and writers a chance to talk about what they feel is important”. At first he used to script a lot of questions in advance, but now, “for some of the shorter interviews, I just turn up and see where it goes. I just want to give people a chance to chat”.

His aim is to put out two podcasts each month. He is in charge of the day to day running, although his partner and fellow poet Lizzy Palmer helps out with some shorter interviews, as well as guest experts chairing occasional discussions. The Arts Council cash is partly being used to pay other writers to programme individual episodes covering topics that affect them personally. This has already included discussions about artist finances, accessibility in the arts, and creative writing as a therapeutic tool.

This last subject has a resonance for Turner personally. He began writing poetry again, after a spell composing it in his late teens and early 20s, around the time he spent a month in a psychiatric hospital in the spring of 2014. He is open about it: “I came out with lots of notebooks, lists of sentences that looked like poems, only they didn’t make sense.” He goes on: “What attracted me about spoken word is that it gives you the ability to get up and speak about anything, including mental health.”

The podcasts’ core following includes his dad –“he’s got no interest in poetry, but he listens to enough of them to know that it’s not just because his son’s doing them.” Turner’s proudest moment? Separate podcasts conducted with poets Travis Alabanza and SA Smythe, “both trans[-gender] and queer and black … the idea was to talk about QTIPOC [queer trans intersex people of colour] …and the barriers that anyone identifying with that may face. Being trusted by these two writers allowed me to ask them questions.”

Podcasts have also been in Cuba, Nigeria, Norway, Sweden and Turkey, and the Arts Council money will help fund planned 2017 trips to Belfast, Glasgow and Newcastle, as well as to more rural areas. Turner is proud of the project’s south-east London roots, but does not want it to be London-centric but nationwide.  A new tranche of Arts Council cash just released will enable the transcribing of much of the podcasts archive, with such transcripts of these and fresh podcasts available to download.

Have there been any embarrassing moments while recording the podcasts? Turner is rueful: “My most embarrassing moments have been my lack of technical ability – twice realising I hadn’t pressed Record at the end of an interview. Luckily, the second time I noticed. Interviewing Lizzy, my partner, when we had pretended that we didn’t know each other. We put out a second version.”

He is happy to get feedback: “People have not been afraid to give me criticism. I knew I had to improve technically, with better recording quality, and put out podcasts more regularly.” [They are now aimed at the first and third Mondays of each month]. “It’s important that you have a regular slot.”

He added: “My style has changed, becoming more relaxed. Sometimes you have to coax people along a bit, sometimes you have to shut them up. I’m trying to offer something different, not so analytical. I’ve interviewed a poet in their pyjamas, after they knew I wasn’t bringing a camera.”

Performance poetry, spoken word, page poetry, it's all on the podcasts - although he admits that "spoken word lends itself more to the medium I'm working in". In October the project celebrated its two-year anniversary, notching up eight different hosts, more than 100 guests, and over 150 poets reading their work. There are now 90 episodes available to download.

For Turner, the podcast format works. “I’m just more comfortable with talking to people, including strangers, and helping them to relax.” Coming up soon is a chat with Matt Abbott.