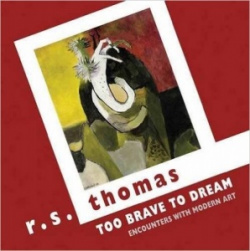 This is a book of ekphrastic poems by an elderly Welsh clergyman, left between the pages of two treatises on art. An inspiring description? It makes a difference that the artists included Dali, Tanguy, and Magritte and the poems are by RS Thomas. He was a poet known for writing about the harshness of life in the Welsh countryside, but beyond that for his questioning religious poetry. He was also politically active with the Campaign for Nuclear Disarmament, and in opposing the degradation of the environment through industrial development.

These aspects of his work map easily onto his response to surrealist works such as Yves Tanguy’s Terre d’ombre and The extinction of the Species. The first shows a “plain … with tree/ stumps for head stones/ where God wanders at a loss/ in their names’ absence /as to which one he / is to resurrect.” The second echoes this with “ … a landscape God/ looked at once and from which/ later he withdrew his gaze.”

The poems were found after Thomas’ death between the pages of Herbert Read’s Art Now: an introduction to the Theory of Modern Painting and Sculpture and Surrealism. Tony Brown and Jason Walford Davies, the editors, have printed pictures and poems following that order, and the overall title is also theirs.

In the resulting sequence there is a tension between Read’s ordering and Thomas’ response that is well captured by the editors’ subtitle Encounters with Modern Art. It is as if we were walking with the poet through a gallery curated by someone else entirely, hearing what images and stories the works have woken in his thoughts.

The main title of the book, Too brave to dream comes from the last line of the poem found alongside a detail taken from one of Henry Moore’s 1941 shelter drawings made during the London Blitz, showing a sleeping figure. The strength of Thomas’ words here relates directly to this context: “ … Alas/ that waking to safety should be waking also/ to survivors poking among the remains of others/ who were too brave to dream.”

Thomas is not over-respectful of the artworks. He will be imaginative and even anachronistic when he chooses.  For example, House in Aasgaardstrand by Edvard Munch dates from 1905. It shows a house with an empty road, and a small cluster of people in the bottom right hand corner. Thomas sees “The emptiness/ is to draw our attention/ to those in the corner/ who, in anticipation of time,/ as though like the Gestapo it would arrive in/ its van to take them away,/ have gone underground.”

There is also lightness, most strongly in the conversation Thomas gives the flirting diners in George Grosz’ Restaurant Scene, and in the attitude imputed to Henri Matisse’ Odalisque with her chess board, who “… is not to be bought./ … you must play her/ at her own game …”

The eitors have given a full and interesting introduction, describing the development of Thomas’ work and acknowledging the influence of his first wife, the artist and art teacher Elsi Eldridge. There are some – but not too many – pages of references and editors’ notes, as you might expect from a publication supported by Bangor University, home of the RS Thomas Research Centre.

Beyond this, it is a gorgeous book to look at and read. It opens easily in the hand with the poems on the right and a picture on the left. High-quality paper shows off the colours. The poems are surrounded by white space but still enjoy a large and clear font, so that it is easy to shift focus from words to picture and back again.

At £12, this book is also terrifically good value. These poems are not fairly described as left-overs from Thomas’ 1985 collection of ekphrastic poems, since they were often written on the back of later-dated papers, but making a comparison between the books would be expensive. Ingrowing Thoughts is now listed on Amazon at £58.74 for a second-hand paperback, £275.56 hardback. “Special thanks”, indeed, to the Bangor Fund “for assistance with reproduction and copyright costs” for Too Brave to Dream.