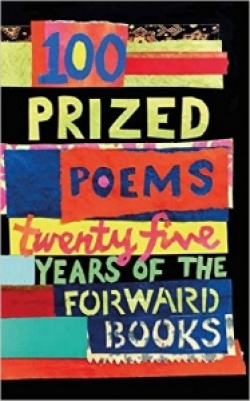 Twenty-five years ago the first Forward prizes were awarded, going to Thom Gunn (best collection), Simon Armitage (most promising young poet), and Jackie Kay (best single poem). In 1992, as Forward prizes founder William Sieghart points out in his preface to 100 Prized Poems: 25 years of the Forward Books, George Bush and Boris Yeltsin declared the cold war officially over, and the Maastricht treaty created the European Union.

Times have changed, but since 1992 there has been a Forward anthology to celebrate each year’s prized poems. Bookshops with the most meagre poetry offerings could usually be relied on to stock a copy. In the early years of a late awakening to poetry I sought out the latest Forward anthology as soon as I knew it was published.

This book is a distillation of those anthologies – and sometimes you can trace the tracks of history within its pages. Most striking is Tony Harrison’s ‘A Cold Coming’ (1993), focusing on the horrific image from the first Gulf war of an Iraqi soldier consumed by fire. Daljit Nagra’s exuberant ‘Look We Have Coming to Dover!’ (2005) celebrates immigration, and now seems a Blair years period piece, given the distrustful, resentful nation that we are now. It needs to be said that the Forward judges have commendably paid no heed to the country’s change of mood, awarding the top prize to writers from the Caribbean – Kei Miller, Claudia Rankine, and Vahni Capildeo - for the last three years in succession.

Time marches on, so there’s now also 2017’s Forward Book of Poetry, of course. It includes poetry by Ron Carey, Harry Giles, and Melissa Lee-Houghton, all shortlisted for best first collection, and who all impressed me in particular when they read at the Forward prizegiving night back in late September.

As well as the shortlisted poems, each Forward anthology also includes a number of highly commended ones. It’s heartening to spot among them poets such as Peter Knaggs, a Write Out Loud Poem of the Week winner earlier this year, William Letford “outside Greggs eating macaroni pie” (‘This is it’), and former Birmingham laureate Roy McFarlane’s moving poem about adoption (‘Papers’). And at the same time ponder a little on how poems such as ‘Dustman’ and ‘Felling a Tree’ by the more well-known Michael Rosen and Andrew Motion made the cut.