Centres of Cataclysm, 50 years of Modern Poetry in Translation, Bloodaxe 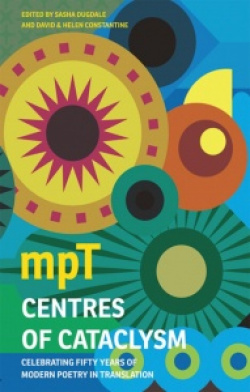 Modern Poetry in Translation was founded by Ted Hughes and Daniel Weissbort, went into a splendid second incarnation under David and Helen Constantine, and now continues to flourish edited by Sasha Dugdale as mpT, handsomely redesigned to be the best-looking as well as most intellectually engaging of British magazines.

In all that time it has been our window on the world, publishing poets writing in a hundred or so different languages, and this selection of the best of them, featuring some well-known names but also many who will be new to the reader, makes for an extraordinarily rich anthology.

There are beautiful poems here and urgent poems. From the start Modern Poetry in Translation has been committed to bringing us voices from countries at the sharp end of politics and history, from the battlefront. In her editorial to the current edition of the magazine, Sasha Dugdale makes it crystal clear why the work of mpT, and why the work of the poets of the world is more vital than ever:

“This year ... people bombed hospitals and towns, they raped, mutilated and killed in the most frightful ways, they firebombed shops and chanted hateful things, they knifed and ran over strangers, they trafficked refugees and migrants and in doing so killed them. They sold life-jackets to children that absorb water and sink, they spoke against refugees and the poor, they set up walls and chains of soldiers and riot police. They bullied, they lied, they made promises they couldn’t keep and they cheated. They were racist and encouraged hate crimes, they sent aggressive and frightening tweets, they bluffed, threatened and bribed. In 2016 our human dignity lies around us in tatters.

It has been a shock for some of us to look round and see with such sudden sharpness that personal articles of faith (a belief in internationalism, in hospitality, in the importance of other cultural expressions and ways of being and in the common humanity that underpins them) are actually inimical to others. Now we, too, are eaten away by bitter impotence and the sense of some irrevocable change in the state of the world. 2016 is a bereavement of a year.

We might consider it a privilege to have got this far without the intrusion of such a grave political-existential crisis – our friends from other parts of the world have grown up with this sense of alienation and powerlessness and it is clearer than ever now how they have dealt with it. When I read poets like Golan Haji, or Choman Hardi, Kim Hyesoon  or Recaredo Silebo Boturu I see that they have elected to put their faith in what Fergal Keane at a recent mpT reading called ‘the civilising power of poetry’.”

More vital than ever is it now to show an affirming flame.