'Let America be America again, Let it be the dream it used to be'

by Julian Jordon in Washington 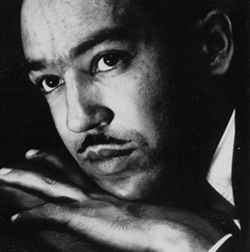 Poetry is invoked as a rallying call in the US presidential election today as, in an eve-of-poll New York Times article, Harry Belafonte writes: “What do we have to lose? Everything.”

Let it be the dream it used to be.

Let it be the pioneer on the plain

Seeking a home where he himself is free.

(America never was America to me.)

Let America be the dream the dreamers dreamed—

Let it be that great strong land of love

That any man be crushed by one above.

(It never was America to me.)

He explains his reason for quoting the work as: “When Hughes [pictured] writes, in the first two lines of his poem, ‘Let America be America again/ Let it be the dream it used to be,’ he acknowledges that America is primarily a dream, a hope, an aspiration, that may never be fully attainable, but that spurs us to be better, to be larger. He follows this with the repeated counterpoint, 'America never was America to me,' and through the rest of this remarkable poem he alternates between the oppressed and the wronged of America, and the great dreams that they have for their country, that can never be extinguished.”

Belafonte is clearly concerned about a Donald Trump presidency destroying decades of progress in the US since the era when, as he writes, “it was an America where the life of a black person didn’t count for much. Where women were still second-class citizens, where Jews and other ethnic whites were looked on with suspicion, and immigrants were kept out almost completely ... an America still ruled, at its base, by violence. Where lynchings, and especially the threat of lynchings, were used to keep minorities away from the ballot box and in their place.”

It has been reported in the US press that Trump has called for election monitors, which has been interpreted as armed vigilantes attempting to dissuade black and Hispanic voters from exercising their rights at the ballot box. Perhaps Belafonte could have added these verses to further emphasise what is at stake:

I am the poor white, fooled and pushed apart,

I am the Negro bearing slavery’s scars.

I am the red man driven from the land,

I am the immigrant clutching the hope I seek—

And finding only the same old stupid plan

Of dog eat dog, of mighty crush the weak.

I am the young man, full of strength and hope,

Tangled in that ancient endless chain

Of profit, power, gain, of grab the land!

Of work the men! Of take the pay!

Of owning everything for one’s own greed!

Belafonte observes that Mr Trump, who is not a poet (your correspondent did try to discern his policies on poetry) either in his late-night tweets or on the election stump, sees American greatness as some heavy, dead thing that we must reacquire: "Like a bar of gold, perhaps, or a bank vault, or one of the lifeless, anonymous buildings he loves to put up.”

Belafonte, singer, artist, activist – yes, the Banana Boat Song, Oh, Island in the Sun, that Harry Belafonte – is not being dewy-eyed about this, as he says, again quoting Langston Hughes:  “ ‘The land that never has been yet’ - if there is still much to be done, at least we have advanced our standards of humanity, hope and decency to places where many people never thought we could reach.”

◄ Anatomy of a prize-winning poem: how Abigail Parry won the Troubadour

The Way the Crocodile Taught Me: Katrina Naomi, Seren ►

Hi Julian, just caught up with this. History, like water finds its own way, and individuals can do nothing to change the back causes of events but only influence the future. If only we were better at it. Out of the rotting flesh comes forth sweetness (dave Ch 1 V. 1). I presume shock waves still reverberating.