The view from the train: poets deliver a special night on BBC2 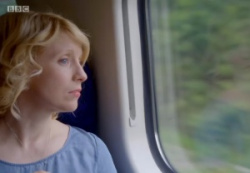 There was the perfect excuse for a poetry lover to be a TV couch potato on Saturday night. Congratulations to BBC2 for providing an alternative to the usual fare of The X Factor and Match of the Day – a night of poetry taking in Railway Nation, a response to the classic poetry-film Night Mail, and a mesmerising live performance by Kate Tempest of her new work, Let Them Eat Chaos.

Night Mail, a 1936 documentary about a London-Scotland postal train, produced by the GPO Film Unit, ends with the famous "verse commentary" by WH Auden: “This is the night mail crossing the border …”, intoned to the rhythm of the train, and echoing the pace of Robert Louis Stevenson’s briefer ‘From a Railway Carriage’. The score was by Benjamin Britten.

In Railway Nation: A Journey in Verse, five contemporary poets boarded the train at different intervals in relay fashion, with Sabrina Mahfouz perhaps picking the short straw, the start from Euston to Milton Keynes: “Neither here nor there, not north, not south.”

The poetic commentaries were interspersed – maybe to make it more palatable to the general viewer – with documentary-style, poignant stories from individual passengers and train workers, of loss, separation, recovery, pleasure in work, that had a poetic quality of their own. The poets are seen scribbling in notebooks, apparently eavesdropping.

Michael Symmons Roberts took us to Birmingham with his ‘The Spine of England’, paying due respect to Auden, repeating his predecessor’s rhythm of “the steam train’s steady metronome” with: “Up through the Midlands, pelt inland, north as fast as the track would stand”. But there are far fewer letters to shift these days: Symmons Roberts points out that “as we fly apart, we tell what truths we can in texts, email”.

At Birmingham New Street Liz Berry, pictured, caught the train, her soft Black Country vowels accompanying us to Crewe. She looked out of the window and spied “little horses” – sculpture installations – in the fields, and tenderly asked them to bless her fellow passengers: “The wenches laughing in their gorgeous makeup … the babbies dozing … Mrs Begum, alighting for HMP Featherstone”, scrapyard workers amid “acres of vans and rusted Fiestas”, little terriers heading for “the secret nettled heaven of the allotments”. Her journey ended with a singular image, and another invocation to the little horses, to bless those “not born yet … held in the darkness, waiting for the signal, the green light, and the whistle”.

Andrew McMillan passed her as he got on at Crewe, noting “the piston kiss, door hiss”. His ‘Coupled’ journey to Carlisle focused on partners, lost and found, and asked: “What is a journey if not the constant leaving behind of things?”, before concluding that “it is possible to settle into a life that feels constantly in motion”. Imtiaz Dharker’s ‘Like Letters to Glasgow’ took us back to Auden, with fast, dramatic images: “Train chases river, races after it like a border riever”. Meeting a stranger is “like opening an unexpected letter”, echoing Auden’s “And none will hear the postman's knock without a quickening of the heart”. At the end of the journey Dharker’s passengers take up their belongings and “their longings … as if they are love letters, delivered home”.

The music was composed by Dru Masters. My one criticism? There were perhaps rather too many spottings of Virgin logos for anyone who has suffered at this train company’s hands.

And a favourite line? The last line of Sean O’Brien’s understated but effective poem ‘Railway Nation’ linking the journeys, read by Maxine Peake. O’Brien is a poet who knows the railway network like the back of his hand. “Listen! That’s a train” is simple but spine-tingling for anyone in love with railways.

The other major poetic highlight of Saturday night was Kate Tempest’s performance of her apocalyptic Let Them Eat Chaos album at the Rivoli Ballroom on her home ground of south-east London. I must confess that I’ve never seen this multi-award-winning performance poet before; but within minutes of registering her passionate delivery, epic vision and her use of rhyme as a weapon to punch out the words, I could see what the furore is all about. Her picture of a city in crisis, where no one feels they belong any more, is brought into sharp focus by her spotlight on seven strangers who collectively are unable to get to sleep at four in the morning. I spotted nods to Bob Dylan and also The Who. Pete Townshend sang about a “teenage wasteland”. Has Tempest updated TS Eliot and written a Waste Land de nos jours? You might think her pessimism is exaggerated, her insistence that we’re all to blame is over the top  – and then you remember Aleppo. What I did find difficult to swallow was her almost cursory solution right at the end – that we all just need “to wake up – and love more”.

It was unfortunate that her feat of memory and performance was followed by five minutes from three other poets – Deanna Rodger, David J Pugilist, and Isaiah Hull -  in a kind of cursory open mic tacked on at the end. It was an inevitable anti-climax that detracted from Tempest’s impact, and did those three poets no favours either.

BBC2’s poetry night was topped and tailed by a homage to Sir John Betjeman and his Cornish connections by restaurateur Rick Stein, and Poets at the BBC, that took in, among others, appearances by Betjeman and Auden on Parkinson, Stevie Smith, RS Thomas, and the “rap poetry” of the extraordinary Dame Edith Sitwell, a performance poet – in every sense – ahead of the game. But why no poets after Linton Kwesi Johnson, circa 1970s-80s? Did they just run out of time?

And another thing! ? If the BBC are looking at this - I bought a telly licence for this, and this only. This is what we want to see, and we'll pay for the licence for it. More poetry please, and not elitist inaccessible nonsense either.

Let Them Eat Chaos should come with a trigger warning for other poets: May Cause Crippling Self-Doubt ? Holy macaroni!! I sat there with my gob on the floor, scabs on me chin, watching Kate on Saturday. And I'd disagree with you Greg on the ending. Cursory? Nah - pithy maybe, succinct definitely, sublime - without a doubt. That hit hard, and had both me and Bob with a bit of grit in our eyes. We CAN'T make enough of a change now but we CAN do these simple things to help each other out, to be and to connect. I've watched it twice now and am still knocked for six by it.

They didn't know enough poems after the 70s because they don't read Write Out Loud's articles. Their loss. excellent article, Greg.

As a one-time train spotter, I decided to climb aboard
and follow this poetry line to its destination. The trip
was more enjoyable that I'd anticipated, with its mix
of material and personal poetical observations. I agree
about the singular image of the unborn child - waiting in
the darkness of its tunnel for the green light for its own
journey...a very imaginative analogy in the wider context. A "well done" to its writer.
The Stein/Betjeman homage was enjoyable in its own
intent, and a gratifying reminder that the everyday
minutae of life does not need obscurity or Mensa mindgames to provide memorable images. The poet's
biography "Summoned by Bells" might just as easily been
titled "Summoned by Whistles" to reflect his famous love
of railways...very apt in the wider theme of an
admirable BBC 2 peaktime evening's viewing.