'It's more than just words ... it's a way of connecting with the world' - Kat Francois 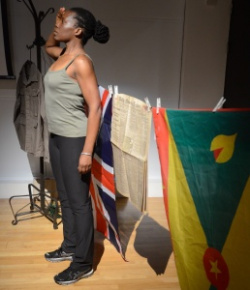 A spoken word show about first world war soldiers from the Caribbean that was reviewed on Write Out Loud earlier this year is returning to the Roundhouse in London in October, as part of Black History Month. In between it has been performed at the Imperial War Museum to mark the centenary of the battle of the Somme. Greg Freeman talks to its author, performance poet Kat Francois.

Raising Lazarus is a play that you first performed in 2010, but you have said that it is still evolving as you uncover fresh archive material. Researching it has meant journeys to Grenada, and strengthening links with family out there. Would you say it has put you more in touch with your Caribbean heritage?  You’ve said that the pace of life in the Caribbean is a shock to the system for a Londoner like yourself.

I do not think I realised the significance of Raising Lazarus when I first wrote and performed it. To be honest, it took a while to grow on me and it’s probably the reactions of others which made me realise what an impact it was having on the audience, especially immigrant communities.  They were seeing their own struggle to find out the truth of their history presented on stage in front of them.

I would say researching the play has put me more in touch with my heritage. It has forced me to not just go on holiday but to research and talk and connect with as many people and organisations as possible. Cousin Bertine who I mention in the play and who I was lucky enough to meet in 2009 and who has sadly passed away now, she was in her 80s when I met her and was able to talk to me about Lazarus and the impact of his death on those around her. Even though she was not alive when he was, she was still able to give me a some information which was invaluable.

I have learned on this journey - history may be history but loss, grief, the personal stories… bring history alive. Grenada is a place I grew up hearing about, was told stories about. I always had an interest and would gobble up the stories my mother told me of her Caribbean upbringing. The play has allowed me to develop that further. The next step really is to get the play out there; I am crossing my fingers that I will be able to take Raising Lazarus out to Trinidad where I have family as well as Grenada and even New York where Lazarus’s granddaughter still lives.

One remarkable feature of Raising Lazarus is the energy you give to it, often running on the spot for long periods as you demonstrate how you tried to keep fit in Grenada while doing your researches. Is that the way you try to live your life, to set a certain pace?

I move fast, I have a lot of energy; I tend to keep going until I burn out. I am learning to pace myself a little better these days. Just like running, to make it to the end of the marathon you have to learn to pace.

Being self-employed, you juggle many hats, can work in many different places in one day, let alone a week, travel around a lot and interact with many different types of people. I like it; it means I never get bored; my life is varied and stimulating. Over the last three years I have been on a consistent health and fitness journey and that helps me to keep my energy up and keep my life moving at a pace I like.

I have always been energetic and hyper, I have always moved through the world at a faster pace than most people, running, weight training keeps that energy in check and performing also gives me a massive outlet. This helps me to be calmer in my ordinary life as I know have an outlet, so I am no longer that child who annoyed everyone by talking incessantly and bouncing around a room. In fact that energy and vibrancy and ability to talk ten to a dozen, has given me a career.

You’re a poet, an actor, a playwright, a comedian, an educator. What came first?

I have always had an interest in writing, I wrote stories and poetry and kept a diary as a kid, I always loved dance and acting. Before I fell in love with performance poetry, I was a dancer, with a love for West African dance. I guess you can say performance and writing is something I was destined to do.

I was writing in my 20s, but it was not until I was 26 I popped along to a night called Singers and Poets Night in Brixton. I was with a cousin and she tried to encourage me to go on the open mic, but I was convinced I could never do anything like that and refused to go on. I was so blown away by what I saw and inspired, so I went home and practised for a whole month, overcame my fear and took to the stage … that is where it all started.

Which are the poets you most admire?

You’ve been running Word4Word, a monthly spoken word night in London for over 13 years. That’s a long time. Do you still get a buzz from doing it?

Word4Word is almost 14 years old, and that is a hell of a long time to be running an event. The Theatre Royal Strafford East, where the show is based, has been very supportive and that is one of the reasons it is still going.  Poetry and spaces that support poetry can be rare to find.

I have not lost my enthusiasm for Word4Word, there is always a need for good quality poetry nights which also provide a space for open mic.  As poets we learn our craft on the stage in front of a live audience. So as long as there is a demand from poets and the audience, I will keep Word4Word running.

You won the first televised poetry slam on BBC3 in 2004, and went on to win the world slam title a year later. How did that feel at the time?  Is live poetry still a very important part of your work?

Winning the BBC3 Slam and the world slam championships was a nod in my direction that I had made the right decision in leaving my job and perusing a career in the arts! It is always a risky move … worry about sick pay and holiday pay, paying rent and being able to survive on an artist’s wage. Those two awards made me feel as if I made the right decision and 12 years later I can still say that yes it was the right decision and I have no regrets. Having the ability to follow my heart, my art, express myself, create work, share work, perform live poetry is all part of what makes Kat, Kat, and I would not be as emotionally satisfied with my life if those gifts were stifled.

There is also the sense that performance poetry can develop into stand-up theatre. Did that happen for you?

I was lucky that I have had the space to develop my work from poetry to plays. Working with the director Dawn Reid on my first solo play Seven Times Me sowed the seed. Since then I have created three comedy shows, and, of course, Raising Lazarus. Being able to develop as a writer and performer are important aspects of being able to grow and push yourself outside of your comfort zone. Through my work with young people I have also been able to develop this style, having devised a number of plays whereby I wrote the dialogue of the play and the young people wrote the poetry. It is an interesting and stimulating way to work.

How important in your life is working with young people? There were a number of your students in the audience when you last performed Raising Lazarus at the Roundhouse in May, I believe.

My work with young people is very important. Recently a young poet I know committed suicide, and it made me realise that what we do is more than just workshops, it’s more than just words, for some people, even for some of us facilitators, it’s life.  It is an important form of self-expression and way of connecting with the world, a way of making sense of our own world, a way of keeping sane. It is not to be trifled with. We create safe spaces for young people to laugh cry, express create and grow. The exchange is mutual, working with young people keeps me young and vibrant, teaches me what is going on in the world, keeps me humble and to be honest brings me great joy. It is a job I love.

Raising Lazarus will be at the Roundhouse, Camden for three nights, 7.30pm, 19 to 21 October

A great interview with one of the scene's true forces of nature. Thanks, Greg. Thanks, Kat.