Soldiers of the Caribbean: Kat Francois lifts lid on untold stories from the first world war 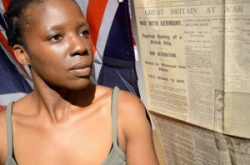 You might assume that Raising Lazarus, a play by performance poet, actor and comedian Kat Francois about her relative's role in the British West Indies Regiment, had been timed to coincide with the centenary of the first world war.

In fact she first performed it in 2010, but the show, based on Lazarus’s enlistment, journey to Britain, Egypt, and on to Kenya, where he met a mysterious death, is still evolving as fresh information comes to light.

Raising Lazarus, which has been shown in Canada, South Africa and Australia, and was performed to a packed, enthusiastic audience at the Last Word festival at the Roundhouse in London on Saturday, is funny, exuberant, and energetic. It also raises pointed questions about the treatment of black soldiers by the British – and why those men from the Caribbean went to fight in the war at all.

In the play Francois sings: “We’re going to mash up Germany, before they mash up we.” But that is by no means the whole story. As the mother of his child asks him before he sets off: “Why would you wanna go fight in a war, that wasn’t yours to fight?” She also reminds him: “From what I remember, you can just about kill a chicken.”

There was also the question of pay. The men from Lazarus’s island of Grenada understood that they were to be paid the same rates as the white soldiers. That didn’t happen. Lazarus’s own comrades weren’t required to fire a shot in anger, and Francois suggests that this is because they were not trusted with guns. Certainly, there was tension between while soldiers from South Africa and the black men from the Caribbean when both found themselves on the same side in Egypt.

In the play Lazarus, who is shown as not afraid to speak his mind, has a boxing match with a white soldier who has offended him. In a physically demanding scene Francois portrays the fight in between running on the spot as she demonstrates how she ran miles in Grenada to keep fit while trying to investigate the back story of the first cousin of her great-grandfather.

She laments the lack of archive facilities on the island where many of her relatives still live, and also describes the slow pace of life there which she has to adjust to after arriving from London. Plus the hair-raising minibus ride over the mountain, which she didn’t adjust to at all.

In England, some men died from the cold – “non-fighting soldiers, and yet we die.” At the Imperial War Museum Francois finds the sympathetic diaries of a British nurse who looked after them at a convalescent home in Seaford on the south coast.  Those that were well enough to be shipped on to Egypt, where they mainly dug trenches and latrines, and found the heat oppressive, unlike the Caribbean. From there they were sent on to Kenya.

A glorious story? Maybe not. But thought-provoking and timely, certainly, and delivered in a range of voices, in a robust and very entertaining way. Good luck to Kat Francois, who also runs a monthly spoken word night at the Theatre Royal Stratford East, in her continuing quest to find out more about the men who “should not be ignored, should not be airbrushed from history”.