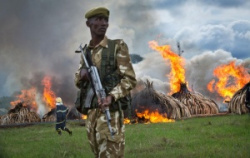 I'm speaking and performing some poems tomorrow in Manchester after a march as part of both the Global March for Elephants and Rhinos, and 100 Thousand Poets for Change. If you'd like to take part we're assembling in All Saints Park, Manchester at 11.30am. Or look on the Global March for Elephants and Rhinos website, and there may be something going on in a city near where you are. I've written this poem especially for the occasion, based on the biggest ever burning of a confiscated ivory and horn stockpile, which happened back in April this year in Kenya.

A wise old hippopotamus explains the men's hypothesis:
"They're doing it to publicise the poachers' atrocities,
to post a message in the press
that horn and tusk are valueless,
that ivory's just a broken tooth
obtained by murder and abuse
of elephants on a mammoth scale,
and rhino horn's not horn at all,
it's clippings from a fingernail
it's sweepings on the barber's floor,
it's junk!" he says, "and I know
it's never worked as medicine,
it's just a protein, keratin,
no use to any living thing
except our friends the rhinos.
They're on the brink
and in a blink
of twenty years they'll be extinct."

So let it burn!
Let it burn!
Let the bone-fire burn!
Put the butchers out of business till the elephants return.
Let it beam
like a beacon to the brokers in the East!
Let it blaze above the bloodshed till the ivory trade has ceased!
Let it burn
till they learn
in Hong Kong and Vietnam
that those "doctors" are imposters
and these treatments are a sham!

Because the TV cameras were all focused on the pyre
where thirteen thousand tusks and two tonnes of horn were blazing,
nobody noticed as the blood flecked flames rose higher
animals in the shadows doing something quite amazing:
the lions and the wildebeest had formed into a choir
and the cheetahs and gazelles had joined together and were phrasing
their new-found comprehension of the purpose of this fire,
and the rangers who protect them were the ones that they were praising:

◄ A Message to the New Government

Tim,
The enthusiasm -almost - overcomes the meter and the rhyming. (stanza four resists admirably though)

I`m convinced (even though I am somewhat scared of both Rhinos and Elephants) I`m on your side.

Love the `zeal of zebras`