A Message to the New Government 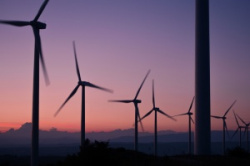 As Once-great Britain takes a bow
and we leave the stage of the European Union,
the quintessential issue's the quandary how
we accommodate the suck of an economy consuming
two thousand million megawatt hours
of climate wrecking energy by the year
when there's finite reserves of fossil fuel power.
I spurn the allegation that this is "Project Fear".
I'm more than just a hippy being holier than thou -
fear is spawned by danger and the danger's indisputable.
My argument is anchored in the irrefutable:
This nation needs renewables, now!

Antiquated oil and coal are embroiled
in climate catastrophe, while fracking for gas
would devastate the countryside,
pollute the water nationwide.
The nuclear option is uneconomical,
beset with corruption and crushed by astronomical
overheads and capital
but Hey! Why such a fuss?

The breezes are frolicking, the sunshine is blazing,
the tides roll in, and underneath the ground
rocks are hot as the furnaces of Hades,
and there's power in the rivers and there's power in the pound
of waves on the shore, and farmyards and landfills
are fizzing with methane, a greenhouse hazard
we can bottle and exploit. Bring these to the anvil
of cutting edge technology with expertise gathered
from the excellence of British engineers!

'cause fuckit we're smart!
Yeah fuckit we're devious!
A powder keg of genius,
an effervescent cauldron of ideas.
As nest egg for our kids we should apportion
investment in the best and not endow
them energy that's destined to exhaustion.
The nation needs renewables NOW!

The case is past debate -
clean power could generate
a steady state economy
to make Great Britain greater,
the GDP line straighter,
not soaring up to heaven and then plunging into craters
subject to the whimsies of oil price speculators,
and blest with endless energy we need no more kowtow
to Europe nor to Russia nor to Saudi dictators.
The nation needs renewables NOW!

Not tomorrow, not next week,
not next year nor any time longer.
Wipe the sorrow from our cheeks,
fight the fear and we'll be stronger.
Don't retreat to isolation,
storm the bounds of imagination,
bomb the world with innovation
and avow
that fossil fuels are disallowed.
Shout it boldly, loud and proud:
This nation NEEDS renewables NOW!
This nation NEEDS renewables NOW!

There's a video that goes with this poem: http://youtu.be/tMLzHCwemoI