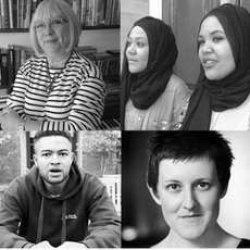 Those of us who enjoy poetry and spoken word know how the words of a single poet can touch our emotions, make us laugh, put a lump in our throat, or see our everyday surroundings in a different light. But what happens when you bring a group of poets together, and ask each of them to write about their city?

Ten Letters describes itself as “a new piece of intergenerational poetry theatre about Birmingham”. It’s an enthralling and engaging mix of poetry, social record, commentary, and dance, a series of reflections on Brum which features some of the best young poets from the West Midlands as well as some more established names, and is – by turns – affectionate, comical, angry, proud, wry, and furious.

The show isn’t some misty-eyed, rose-tinted take on the Second City. Yes, there’s a sense of wonder at the good things about Brum, pride in its diversity, and more than one reminder that it is capable of more than simply apeing London. But we also hear about quirky corner shops squeezed out by high-street chains, about the challenges of life here as a new arrival, and about neighbourhoods that don’t share in the good times, where gang violence takes lives.

Is this show touring elsewhere? I don’t know. Should it? Undoubtedly. If the audience on this night at MAC in Birmingham are a reliable benchmark – and I see every reason to believe they are – then people around the country deserve to hear this group of talented poets from the West Midlands talk with eloquence and passion about the city which is their home. This is honest, critical, clear-eyed poetry which sets itself lofty aims and hits the target with ease.

◄ Four portions of everything on the menu for M'sieur Monet!: Penelope Shuttle, Indigo Dreams