Four portions of everything on the menu for M'sieur Monet!: Penelope Shuttle, Indigo Dreams 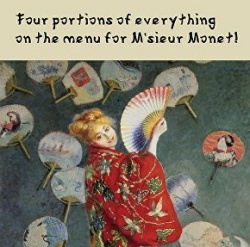 Penelope Shuttle’s first collection, The Orchard Upstairs, was published in 1980 by Oxford Paperbacks. Many collections have followed, along with five novels and the non-fiction books she co-authored with the poet Peter Redgrove, her husband, who died in 2003.  She is currently a Hawthornden Fellow and in 2007 received a Cholmondeley Award.

Her 2016 pamphlet, Four portions of everything on the menu for M’sieur Monet, offers us a form of travel diary that evokes the spirit of places she has visited and the experiences and insights she derives from those visits. It is not always obvious where those places are, unless the reader is well travelled, but they are listed at the back of the pamphlet.  I discovered this helpful extra after reading the poems – but  enjoyed playing Google detective on my journey through the pages. Had I not, the poems would have stood, for these are accessible, pleasureable pieces. I wondered why M’sieur Monet required four portions of everything on the menu, but again, Google told me of his reputation as a gourmand.

Although this is one poet’s travel diary, its 30 pages echo with a variety of voices. Some are conversational, at times itemising the activities undertaken. In ‘Bardsea Sands’, “we seem to be walking/ on the back/ of a sleeping dinosaur”, and later “the mud-sand’s cool and clammy/to our bare and blackening feet/The dog piles in and out of the water” and finally “we head back to the car”.  Similarly in ‘Thames’, “Auntie and me/went from Staines to Windsor/a hot day …/We sat under the stripy awning/nudged under bridges slow slow”.  My sense of a child speaking, rather than a childhood remembered, was confirmed in the almost playground chant of last three lines: “when you and Auntie get to Windsor/you’re tired tired tired of Uncle River/go home on the Green Line bus”.

Playfulness and humour permeate these poems. ‘Columba of Cordoba’ reveals “god’s joke” of “dropping a cathedral/slap-bang down/in the middle/of the most beautiful mosque/in all Islamdom  ̶ “ , which means that the pillars of the mosque are “totally buggered/by the christian cuckoo in its nest”. Similarly, ‘White Garden’, with its references to sleep, snoozing, yawning and snoring, turns out to be an account of “Zissinghurzzt”, a thoroughly enjoyable reveal two lines from the end. More subtly, a mulberry tree is so old it has its own walking stick (in ‘Mulberry’), and at Bardsea Sands, a tide is so far out it has been forgotten by everyone except the tide table.

So these are visits full of pleasure and surprise. But the poems are in no sense slight. I savoured the rueful self-accusation in ‘Park Street’ and ‘Hourglasses in the Church at Jukkas Jarvi’ where the allure and the futility of yearning for the past become evident. In ‘Where he lived’, written in memory of Charles Causley, the potency of place is evoked but also questioned. Silence pervades Causley’s home. What do we hope to find there?  Why do we make such pilgrimages? In the lines “Tunes are playing/from the poet’s piano//they slip through the house/quick and neat as summer rain”, Shuttle offers us some kind of answer. Similarly the puzzling evanescence of what we know to be the solidity of the landscape is explored through gorgeous weather imagery in ‘May Hill’.  When the poet contemplates ‘St Peter’s Basilica, Rome’, she animates what can be the baffling residue of an age of faith by sensing god blowing a vision into the wide-mouthed statues with “marble garments plastered around limbs”.

Depth of insight accompanies humour in these open-hearted poems. Memorable, economical images are key – “Every minute of every year/takes a pinch of Park Street”, “Time (…) elbowing Park Street aside” (in ‘Park Street’); “the ridged sands/baked hard as a dance floor” (in ‘Bardsea Sands’). A sense of place unites the work, and here the music of the language is potent, often sensual. ‘The Flow’, set in South Mainland, Shetland Isles, is suffused with sibilants: “Beyond Spiggy Loch/a remote white-sand beach//curves in a long crescent/where fourteen adult selkies//and three pups/snooze the strandline” (and what joy to ‘hear’ “their mottle-silver skins/glinking”). Similarly, final lines often achieve their effect through alliteration of this kind: the “sunny saint of the squeaky-clean spring” in ‘The Laundry Line’; “in this singing swansong city” in ‘White Swans of The Claddagh’.

These poems can be read quickly, in a sitting. But they reward the reader who revisits them, and inspire the poet reflecting upon places they have known.

Jenny Hockey’s work has appeared in magazines such as Magma, The North and Iota, and anthologies such as No Holds Barred (The Raving Beauties, 1985) and The Sheffield Anthology (Lehoczky et al, 2012). She received a New Poets Award from New Writing North in 2013, and is emeritus professor of sociology at the University of Sheffield.

Penelope Shuttle, Four portions of everything on the menu for M’sieur Monet!, Indigo Dreams, £6

◄ 'She dances through this two-year window'